Paranormal Activity 2 is a 2010 psychological horror film directed by Tod Williams and written by Michael R. Perry. It is a prequel to the original film, Paranormal Activity, released in 2009 but the final five minutes serve as the sequel. It was released in theaters at midnight on October 22, 2010 in the United States, Mexico, United Kingdom and Canada. 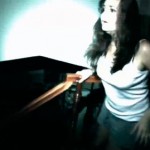 Paranormal Activity 2 teaser trailer was seen with The Twilight Saga: Eclipse upon its release on June 30, 2010. Cinemark has pulled the trailer from several Texas theaters after receiving complaints that it was too frightening.

Paramount and DreamWorks hired screenwriter Michael R. Perry to create the follow-up. Oren Peli, the director of the first film, served as a producer for the sequel. Kevin Greutert, director of Saw VI, was initially hired to direct the sequel. However Lions Gate Entertainment exercised a clause in Greutert’s contract to have him direct the final film in the Saw franchise.

Both of the main actors, Katie Featherston and Micah Sloat, returned to act together again in the sequel.

Tod Williams directed Paranormal Activity 2, which started production in May 2010.

There is an apparent break-in and robbery of their home, yet nothing is actually taken. In fear of a returning intruder, Dan has six security cameras installed throughout the house – in the backyard, baby’s room, staircase, kitchen, living room, and front door. The first night, suspicious activity begins, with the pool light flickering and eventually dying out in the middle of the night. Soon pots begin to fall seemingly on their own accord in the kitchen. Hunter seems to be tormented in his sleep by loud banging sounds.