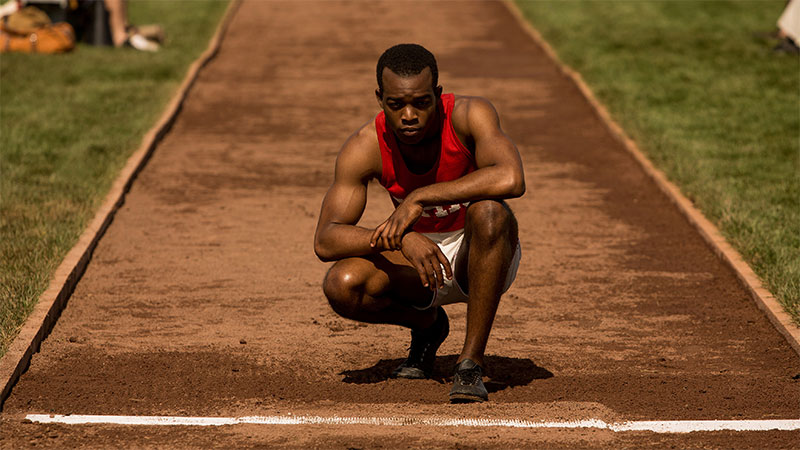 Based on the incredible true story of Jesse Owens, the legendary athletic superstar whose quest to become the greatest track and field athlete in history thrusts him onto the world stage of the 1936 Olympics, where he faces off against Adolf Hitler’s vision of Aryan supremacy. Race is an enthralling film about courage, determination, tolerance, and friendship, and an inspiring drama about one man’s fight to become an Olympic legend.

Careful planning in pre-production allowed for everyone to be on the same page, or, as production designer David Brisbin quips, “the same 1930s song sheet.” Director Stephen Hopkins identified what he wanted visually and tonally from all departments, while set construction parameters were tagged for visual effects work that would extend or enhance imagery. Computer-generated re-creations ultimately included parts of Manhattan; the Los Angeles Coliseum; and flags and banners from U.S. universities.

Producer Luc Dayan, after developing and producing the award-winning short film Tribute to Jesse Owens and Carl Lewis, began to strive to get a movie about Owens made. He would be joined first by producer Jean-Charles Lévy, then by director Stephen Hopkins, and finally by an international coterie of filmmakers – which in itself speaks to Owens’ enduring impact on, and importance to, people all over the world.

Made with the cooperation of the Jesse Owens Foundation as well as the Owens family, Race is the first feature film about Owens. Lévy reports, “Before anything else, we went to the daughters of Jesse Owens and his wife Ruth Solomon. We wanted to convey to them what we hoped to achieve, the intended spirit of the movie, and how we invited their blessing. They were with us through the development process, and have been ever since.”

In writing the screenplay for Race, Joe Shrapnel and Anna Waterhouse chose to focus on the most eventful years of the legendary runner’s life, beginning at the age of 19 when he first arrived at Ohio State University, and ending with his triumphant run(s) two years later on the world stage. As Waterhouse explains, “A cradle-to-grave story didn’t interest us, and we felt we could suggest a lot of what came before and after for him through the prism of this particularly significant stretch in Jesse’s life.”

The screenwriters sifted through hundreds of historical documents, social and political biographies from the era – everything about Jesse Owens that they could get their hands on. “It reaffirmed for us the scale and importance of Jesse’s victories in Berlin, both in the sports arena and in the world at large,” says Shrapnel.

Where to find an actor to embody a young man in the process of becoming a legend? The call went out far and wide, as “we had casting directors looking in the U.K., the U.S., Canada, and any other English-speaking country,” remembers producer Kate Garwood. “We saw hundreds of audition tapes and show reels before we hit upon Stephan James. I’d previously seen Stephan audition for something else as a British character. Now, that’s an accent which is not easy to get right and he handled it brilliantly. Turns out he could do an American one too…”

In fact, the Canadian-born Stephan James had only recently incarnated another hero, civil rights activist and U.S. Congressman John Lewis in Selma. Garwood comments, “When we watched his audition tape, we were terribly impressed. He brought such sensitivity to the scenes that we all turned to one another and said, ‘That’s Jesse Owens.’”

Stephan James plunged into research – and training, since he was already active in sports including basketball, football, soccer, kickboxing, and track and field. The actor became consumed with doing justice to Jesse Owens’ unique running style and posture, and prepared tirelessly. He notes, “If you’re used to running a certain way – as I was – it can be difficult to break that habit.”

Several months’ training with a men’s track and field coach from Georgia Tech made it possible for him to get with the Owens program – as did sessions with Canadian-born 2008 Olympian Hank Palmer, who doubled for James in some running scenes and also appears as Jesse’s brother Quincy. The latter remarks, “I’ve done track for decades, and I’ve noticed that the fluid running style Jesse Owens had back in the day is something we’ve adopted and slightly modified through the years. I feel that Race will motivate young track and field athletes. For me, it was a joy to have the opportunity to be a part of this.

James worked on the dramatic portrayal just as much as the physical component. He remembers, “There weren’t as many videos or recordings available as I thought there would be. Luckily, his daughters and granddaughters were there the whole way through making Race. So, with their help, I was able to work at how Jesse spoke and moved.”

Another rising Canadian-born star, actress Shanice Banton, was cast as Ruth Solomon, Owens’ future wife and the mother of his three daughters – one of whom, Gloria, had already been born by the time of the Olympics. Banton reveals, “To play her as a woman of her time, I looked at how she would carry herself and of course the costumes and make-up helped. But I related to Ruth because she was very warm and caring, and all about family.

The second crucial casting assignment was finding the right actor to play Owens’ coach Larry Snyder, whose training helped the athlete excel. Snyder himself had forfeited his chance at being part of the U.S. track and field team at the 1924 Paris Olympics. The sometimes uneasy friendship between the two men is at the emotional core of the movie and, according to producer Jean-Charles Lévy, epitomizes a central theme of Race. “Jason Sudeikis brings warmth and a likable ease to the character, but he’s also never without a slight edge. We lucked out in getting Jason.” Garwood adds.

Although many of the U.S.-set scenes for Race were shot in and around Montréal, the crucial Olympics sequences were indeed shot in Berlin including at the Olympiastadion, the very arena in which Jesse Owens earned his medals – and which had been built for the 1936 Games. Adjacent to the still-standing stadium is a street named for Owens. The dormitory in Berlin where Owens resided during the Games was not available for filming in, because it has been restored as a living museum commemorating his accomplishments.