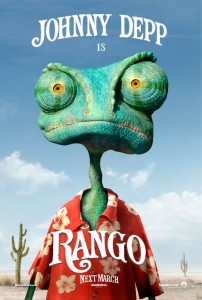 Rango that aspires to be a swashbuckling hero finds himself in a Western town plagued by bandits and is forced to literally play the role in order to protect it.

In the film, Rango is a pet chameleon who lives in a terrarium. He has long thought himself a hero, but then finds himself removed from his contemporary American southwest surroundings and ending up in an Old West town called Dirt, which is populated by various desert critters garbed like characters out of a spaghetti western.

As he’s always thought himself a hero, Rango establishes himself as the lawman, strolling the streets as a sheriff-like character. Unknown to him, the “good guy” role doesn’t do very well in Dirt — with a whole cemetery filled with good guy tombstones. But that doesn’t stop Rango from trying, constantly seeking to fit in with his surroundings, no matter how challenging. At a certain point in the narrative, Rango will come to question everything about himself.

Animation is being handled by CGI veterans Industrial Light & Magic (ILM), and post production at Verbinski’s production company, Blind Wink. This is a first for ILM, because they are usually dedicated to doing CGI visual effects for major film productions. This will be the first time in 35 years they will be doing a fully animated film themselves. During voice recording, the actors were given costumes and sets to “help give them the feel of the Wild West”.

Gore Verbinski called it “emotion capture” with only the audio from these sequences being lifted directly for the final film. Due to Johnny Depp‘s busy schedule, he only had a “20-day window” in which he could shoot his role as Rango, but the filmmakers lucked out in getting all the other actors they wanted for the supporting roles who were available to film their scenes with Depp, where they unusually, but intentionally recorded all their voices simultaneously.

Verbinski said his attempt with Rango was to do a “small” film after the epic Pirates trilogy – even toying with shooting a live-action film while simultaneously helming Rango—but he soon realized just how painstaking and time-consuming animated filmmaking is.

Canadian developer Behaviour Interactive will be developing a video game based on the film.