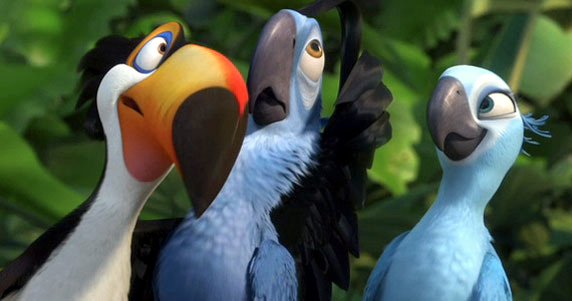 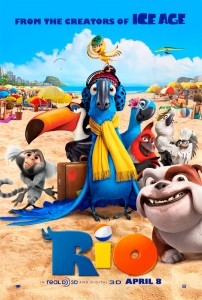 In Rio, Blu, a domesticated macaw from small-town Minnesota, meets the fiercely independent Jewel, he takes off on an adventure to Rio de Janeiro with this bird of his dreams.

Under development for years, Rio is considered “Brazilian-born Saldanha’s dream project”. Saldanha reported that the film will be more musical than his comedic Ice Age movies.

Blu (Jesse Eisenberg) is a rare species of Blue Macaw, who is a resident at a bookstore in Moose Lake, Minnesota, and the last male of his kind. When scientists learn that another macaw was spotted in South America and that the macaw, Jewel (Anne Hathaway) is female, they take him out of Minnesota and send him to Rio de Janeiro to meet her. While there, he learns to confront his fear of flying in order to win her heart. Along the way, they get kidnapped by poachers to sell them to get a fortune. After they escape, they try to avoid the thieves and their pet Sulphur-crested Cockatoo Nigel (Jemaine Clement) with help from Rafael, a wise Toco Toucan (George Lopez); Luiz, a bulldog (Tracy Morgan); Linda, Blu’s owner (Leslie Mann); Flora, a Roseate Spoonbill (Wanda Sykes); Fernando, a teenage boy (Jake T. Austin); Pedro, a Red-crested Cardinal (will.i.am); and Nico, a small Yellow Canary (Jamie Foxx); with bottle cap as a hat.

The teaser trailer of the film was released online on May 20, 2010 and then premiered a day after with the theatrical release of Shrek Forever After. It was also shown in theaters with select screenings of Toy Story 3, Knight and Day, Despicable Me, Alpha and Omega, and Megamind. The first teaser poster for the film was released 4 months later. The new trailer was released online on December 8, 2010 and was also shown with Tron: Legacy, The Chronicles of Narnia: The Voyage of the Dawn Treader, Gulliver’s Travels, Yogi Bear, and Gnomeo & Juliet. The final trailer was shown in front of Rango and Diary of a Wimpy Kid: Rodrick Rules and released on April 2, 2011 on YouTube.

On the 27 January 2011, Rovio Mobile announced a partnership with 20th Century Fox to promote the film. The iOS game Angry Birds Rio was released in March 2011 on Apple’s App Store with 50 levels. Rovio plans to release more levels throughout 2011. A sneak peek for Angry Birds Rio (a golden egg) was available on the original Angry Birds game if the viewers found the secret code in Super Bowl XLV’s commercial for Rio. Rovio said to find the code, the viewers must pause the commercial, frame by frame, until they found the secret code.

In February 2011, the MPAA gave the film a PG rating for “mild off-color humor”. After hearing this, it was reported that some of the producers of the film and executives at 20th Century Fox were apparently unhappy with this rating. Fox resubmitted an edited version of the film to the ratings board one month later, and the MPAA changed the film to a G rating. This is only the third time in history this occurence has happened, after Babe: Pig in the City and Air Bud: Golden Reciever.