Saw 3D, previously known as Saw VII, is an 3D horror film directed by Kevin Greutert, written by Patrick Melton and Marcus Dunstan, and starring Tobin Bell, Costas Mandylor, Betsy Russell, Sean Patrick Flanery and Cary Elwes. It is the seventh and final installment of the Saw film series, and the first shot in 3D. 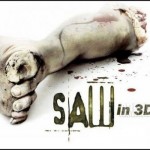 Casting began in mid-December 2009. On February 22, 2010, Cary Elwes was listed on the Toronto Film & Television\’s official list of personnel website for Saw 3D but on March 8 his name along with other cast members were removed from the list. The following month, Lionsgate confirmed his reprisal Lawrence Gordon, last seen in the first film. Dunstan and Melton said that Elwes was on set and filmed new scenes.

An eighth installment was planned, but the decrease in the box office performance for Saw VI compared to previous installments, led to Saw 3D being the final film in the series, and the plot concept for Saw VIII being incorporated into Saw 3D. Saw V director David Hackl was to direct the film, but two weeks before filming Lionsgate announced that Greutert, who directed the sixth film, would direct.

Principal photography took place in Toronto from February to April 2010 and was shot with the SI-3D digital camera system, as opposed to shooting with traditional cameras and later transferring to 3D in post-production. Saw 3D was originally scheduled to be released on October 22, 2010, but was pushed back a week to October 29, 2010. The film was initially rated NC-17 (no children 17 and under admitted) by the Motion Picture Association of America (MPAA) and had be to submitted six times to finally receive an R rating.

A scene being constructed at the Metro Hall of Toronto in April 2010. The scene in the film included 400 extras.

Originally two sequels were planned after the sixth,but in December 2009 Melton stated in a podcast interview with the UK radio station Demon FM that Saw 3D was the final installment and would address unanswered questions from previous Saw films, such as the fate of the first film’s protagonist Dr. Gordon and other survivors from previous films, while bringing a final resolution to the series.

The storyline for a Saw VIII was combined into Saw 3D; this decision was primarily due to Saw VI‘s poor box office performance.On July 22, 2010 in an interview with USA Today the producers confirmed that Saw 3D will officially end the film series.[25] Burg told Reuters that, “In every Saw movie, we left questions open and in Saw 3D we answer every question the audience has ever had”. He added that, “even new viewers will be able to follow and get caught up to speed”.