Scream 4 (SCRE4M) is a slasher film and fourth installment in the Scream series. It was directed by Wes Craven and written by Kevin Williamson, writer of Scream and Scream 2. It stars an ensemble cast of David Arquette, Neve Campbell, Courteney Cox, Emma Roberts and Hayden Panettiere. Campbell, Arquette and Cox are the only returning cast members from the previous films. 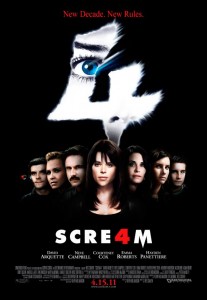 In SCRE4M, ten years have passed, and Sidney Prescott, who has put herself back together thanks in part to her writing, is visited by the Ghostface Killer.

Originally, the series was intended to be a trilogy, but after ten years Bob Weinstein thought it was time for another film. It is intended to be the first of a new trilogy, with both Craven and Williamson signed on for the duration. Filming began in and around Ann Arbor, Michigan on June 28, 2010 and ended September 24, 2010.

A fourth film was announced by The Weinstein Company in July 2008, with Wes Craven saying that he wouldn’t mind directing the film if the script was as good as Scream. In March 2010 it was confirmed that he would indeed direct and stated that, “I am delighted to accept Bob Weinstein’s offer to take the reins on a whole new chapter in Scream history. Working with Courteney, David and Neve was a blast ten years ago and I’m sure it will be again. And I can’t wait to find the talent that will bring new blood to the screen as well. Kevin is right on his game with the new script – the characters and story crackle with energy and originality – to say nothing of some of the most hair-raising scares I’ve seen in a script since… well, since the original Scream series. Let me at it”.

In May 2010, Cathy Konrad, who produced the first three films in the series, filed a $3 million lawsuit against The Weinstein Company, alleging that they violated a written agreement that entitled her company, Cat Entertainment, first rights to produce all films in the series. The Weinsteins argued that this contract required Konrad’s services be exclusive to the franchise, which Konrad calls “false pretext,” claiming the previous film did not require this condition. The suit accuses the Weinsteins of surreptitious behavior and “a scheme to force Plaintiffs to walk away from the Scream franchise without compensation,” enabling them to cut costs by hiring someone else to produce (Craven’s wife, Iya Labunka, not named in the suit).

In September 2009, Variety reported that Neve Campbell, David Arquette and Courteney Cox would return. Craven briefly explained their roles in a later interview with Entertainment Weekly, saying “It’s a total integration of those three and new kids. The story of Sid, Gale, and Dewey is very much a part of the movie.” At a press conference for Repo Men, Liev Schreiber—who played Cotton Weary in the first three films—stated there were no plans for his reprisal. In an interview with FEARnet, Williamson continued to deny a rumor of Jamie Kennedy returning, “I would love nothing more than to have Jamie Kennedy in the film. However to have Randy in the film, it sort of just takes it… I mean Scream 2 was a lie, you know? It’s a false move. So I just won’t do it. I can’t do that. I just won’t do it”. In April, over 12 casting sides were released to the public to buy for auditions of the film.

In May 2010, Hayden Panettiere and Rory Culkin signed on. Ashley Greene was offered the role of Sidney’s cousin, Jill, but the role later went to Emma Roberts. Lake Bell was to play a police officer who knew Sidney from high school but dropped out four days before filming due to scheduling conflicts. Nancy O’Dell reprises her role from the second and third films as a reporter. Roger L. Jackson returned as the voice of Ghostface. Lauren Graham was to play Kate Kessler, the mother of Roberts’ character, but dropped out a few days into principal photography. Craven, like in the previous three films, has a cameo and took to his Twitter to ask fans to pick his role. The Hollywood Reporter reported that Anna Paquin and Kristen Bell have cameos in the beginning of the film akin to Drew Barrymore and Jada Pinkett Smith in the first and second Scream. Shenae Grimes and Lucy Hale also have cameos in the film.