Season of the Witch is a supernatural thriller film, directed by Dominic Sena, and starring Nicolas Cage and Ron Perlman. It was shot on location in Austria, Hungary, and Croatia. A noble knight battles a wicked witch in a bid to save humanity from an ancient evil in this supernatural thriller starring Nicolas Cage and Ron Perlman. Upon returning to his home in Europe, crusading knight Behmen (Cage) finds his faith beginning to falter due to the brutality he’s witnessed on the battlefield. 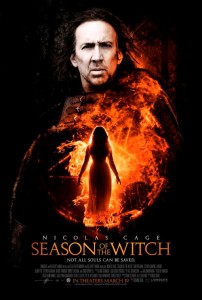 For Season of the Witch, Tippett Studio designed the demon that manifests in the film’s denouement. The art directors researched woodcuts and other artwork for classic demonic appearances.

The Black Plague has decimated the countryside, forcing Behmen and his loyal companion, Felson (Perlman), to seek sustenance and supplies at the Palace of Marburg. They’re weary from war, but they’re about to discover that their struggle is just beginning.

Screenwriter Bragi F. Schut wrote Season of the Witch as a spec script that was placed on the open market in 2000. Numerous studios bid on the script, and producers Charles Roven and Alex Gartner collaborated with the studio MGM to place a winning bid. MGM could not find traction to produce the film, and in 2003–2004 the studio “was essentially obtained by a number of concerns”. Columbia Pictures earmarked several properties for themselves, including Season of the Witch.

The producers worked with director Dominic Sena to perform location shooting throughout Europe. They sought a 14th-century castle to use as a setting for the story; castles visited in Germany, Poland and the Czech Republic could not fit the period. With the film yet to be produced, the project eventually moved to Relativity Media, and Sena was officially attached to direct.

The crew began production immediately after Cage finished Bad Lieutenant: Port of Call New Orleans (2009). The film had a budget of approximately US$40 million, and much of the budget was covered by Relativity with pre-sales to distributors outside the United States. Filming took place in Austria, Hungary and Croatia. Most of the principal photography took place in practical locations, with several days committed to filming on greenscreen. Principal photography was completed by April 2009, but the cast and crew re-gathered a few months later to film additional battle sequences, filming on greenscreen to save on travel. The reshoots were directed by Brett Ratner.

The Sound of Music