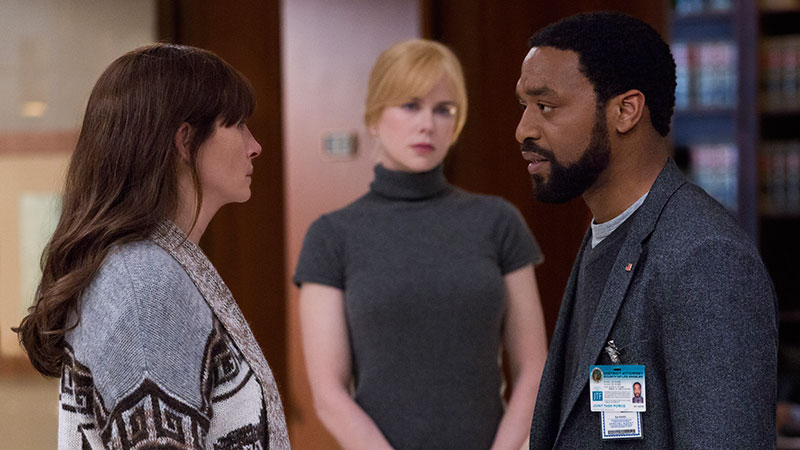 DA investigator Jess Cobb (Julia Roberts), FBI investigator Ray Kasten (Chiwetel Ejiofor), and Deputy District Attorney Claire Sloan (Nicole Kidman) are rising stars, having been selected to serve on an anti-terrorism joint task force in post 9/11 Los Angeles. Jess and Ray are tight-knit partners who share a deep respect and an easy friendship both on the job and off. Ray and Claire come from opposite walks of life, but have a complicated attraction that is a constant undercurrent in their day-to-day encounters. 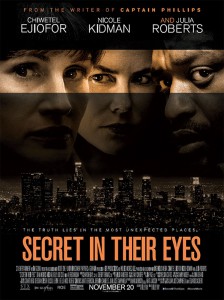 One cinematic element crucial to writer/director Billy Ray was a sense of urgency and messiness. The story returns viewers to the months immediately following 9/11, and Billy didn’t want the investigators’ bullpen to look too slick, too perfect, too orderly.

Billy Ray and Mark Johnson had known each other and each other’s work for decades, but had never worked together. When they saw the Argentine thriller El Secreto de Sus Ojos, neither of them could stop talking about it. “El Secreto de Sus Ojos, is spectacular,” says Billy, “I was completely floored by it, had a reverence for it that bordered on awe. Then Mark asked me if I wanted to adapt it. At first I was hesitant because you don’t want to take on anything that is so great that you feel dwarfed by it before you even start. But I did feel there was an American version of the story worth retelling and exploring.” Every time the pair got frustrated tackling the weighty subject matter, they had an unabashed cheerleader in Juan Campanella, who directed the Argentine film.

Billy says an impetus for the American version lay in the events of 9/11. ”The horror of that event was so big and so indelible for anybody who was in America at that time. But it created a story opportunity for our movie that no other context could have.” Billy admits that he initially thought he was writing a movie about loss. “But it turns out that I was writing a movie about obsession.”

The cast of Secret in Their Eyes is comprised of really, really smart actors who only want the movie to be better. Every request and every note were about making a moment more authentic or making a scene work better or making a transition work better. The first building block to casting the film was the availability of Academy Award-nominated Chiwetel Ejiofor.

“The character of Jess was originally written as a man, Mitch Cobb, until Julia Roberts raised her hand and said if I’d turn it into a woman, she would play it. That was a huge deal and such a great idea but it was not what I was thinking when I sat down to write it.” says Billy. For Julia Roberts the essence of the story is about the evolution of people who were taken off track by destiny. “I was very taken with Billy’s script. I don’t read a lot of scripts that I like and I don’t work very often. But I read this and thought it was truly interesting.”

“Nicole was the last piece to fall into place and she is spectacular. When I went to cast the part of Claire, there were two boxes that had to be checked in terms of the actress who could play it. She had to be the girl you couldn’t get over—or the movie makes no sense—and she had to be someone who is credible as a D.A. Nicole, of course, is both.” adds director. Nicole Kidman says that the plot intrigued her when she first read the script. “Rarely do you get scripts that have three strong protagonists and a really, really strong storyline. I’ve known Billy for a while now and I wanted to work with him and the idea of doing this with Julia and Chiwetel was compelling.”

“Joe Cole was probably the riskiest casting choice we made on the movie,” admits Billy, “because the part called for someone who could go undercover as an informant in a mosque. And Joe looks British, which he is. But he’s such a great actor – and his auditions were so strong – I felt we just had to rewrite the part enough for him to play it.” One of Billy’s requests of Cole was that he not fraternize with the other cast members outside of filming. “I didn’t think that Joe and Julia should ever be anywhere near each other away from the set,” explains Billy. “I thought they should treat each other like strangers. I actually learned that from Paul Greengrass who directed Captain Phillips where he kept Tom Hanks and Barkhad Abdi apart until the day they met on screen. I always admired that and thought it was a great move, so I ripped it off,” he laughs.

Recalls Billy, “The first time we ever did a table read of this script, the whole cast was here in Los Angeles and Michael Kelly was in New York – just a voice coming through a telephone we’d set up in the middle of the room. And he was STILL fantastic. You didn’t even need to see his face to feel his performance, his excavation of the character.”

As Billy began writing the screenplay, Secret in Their Eyes took a detour, as its location originally was set in San Antonio, then San Francisco, London, Boston and finally Los Angeles. Executive producer Jeremiah Samuels had the daunting task of putting all the physical elements together for Billy and his film, beginning with a shooting schedule that would take into consideration not only the cast elements, but also the myriad Los Angeles locations where the director wanted to film. “Unbelievably,” he adds “we shot this on a 32 day schedule which went very, very well.”