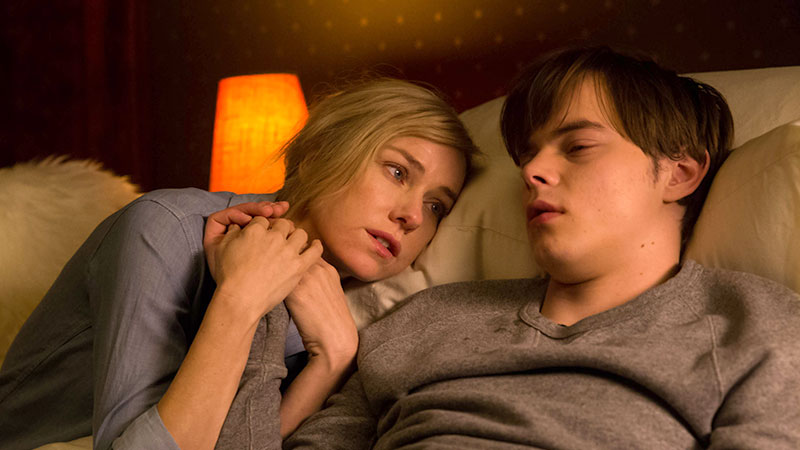 Shut In is a heart-pounding thriller starring Naomi Watts as a widowed child psychologist who lives an isolated existence in rural New England. When a young boy is treating goes missing, and is presumed dead, Mary (Watts) becomes convinced that his ghost is haunting her and her bedridden son. 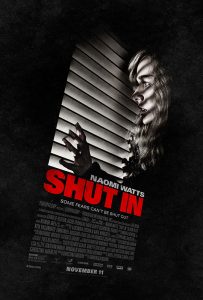 A key scene in the film takes place on a staircase lined with Mary’s family photographs that give the audience a glimpse into her former life. To create the family portraits, the art department digitally combined actress Naomi Watts’ personal pictures with ones of actor Charlie Heaton as a child and then Photoshopped the movie house into the background.

Writer Christina Hodson says the inspiration for Shut In came to her while she was living alone in a creaky New York City studio apartment. Imagining the possibilities behind the unexplained noises she heard late at night, the first-time screenwriter penned the script in just six weeks. The result was a tense psychological thriller with a simple premise, complex emotional undertones and a chilling twist ending.

Executive producer and Lava Bear president Tory Metzger was immediately impressed by the script, which she says was unlike anything she’d read before. “If you do what I do and read a lot of screenplays, you often think you know where they’re going — and very often you’re right. In this case, I had no idea what would happen. One of the things that struck me was that I was 60 pages into the screenplay before I actually understood that instead of a great dramatic movie, I was reading a genre script. That’s not an easy thing to do.”

Metzger says she and former Lava Bear CEO David Linde, who also serves as an executive producer on the film, were excited to find a script with such a strong female lead character. “It was a great part for a woman,”she says, “and that’s something that we’re always on the hunt for, because there are so few of those out there.”

Concerned that the screenplay’s subtle dramatic elements would be lost in the hands of a filmmaker who wanted to make, Hodson says she and the producers were keen to find the right director for the project. Enter Farren Blackburn, an experienced British television director with a strong minimalist vision for Shut In.

Blackburn says he was intrigued with what he saw as the cinematic potential afforded by the script’s economical storyline and confined setting. “When I first read Shut In, I was excited by the fact that it was a genre movie that could be very beautiful and shot with great artistry,” he says. “I’m a big fan of those pared-down ’70s American movies that had a European aesthetic. Plus, Shut Inhas a protagonist you really care about and who has an interesting journey, so for me it was a no-brainer.”

To play the film’s central character, the filmmakers turned to two-time Oscar® nominee Naomi Watts. The British actress, whose career began in Australia before moving to the U.S., says she was attracted to the challenges of capturing Mary’s fragmented state of mind.

Blackburn secured the highly sought-after actress’scommitment to the role via video-conference call, a technology that coincidentally plays a key role in the plot of Shut In.

“I had a nice conversation with him via Skype,”recalls the actress. “Then I looked at some of his work and thought, wow, he’s accomplished and very visual; he knows how to handle this genre very well. So I thought great, okay, I’ll give it a go.” Blackburn remembers the call a bit differently. “I was sitting in my flat trying to prepare for this call with Naomi Watts, which was bizarre in itself,” he says. “We all assumed that following the Skype there would be a period of silence, then possibly a decline — but she shocked us all by committing to the project there and then. In that short meeting, she was everything I’d hoped she would be.”

With Watts on board for the lead role, the filmmakers began casting the roles of Mary’s 18-year-old stepson, Stephen, and her young patient, Tom. Blackburn is confident audiences will be captivated by the performances of the film’s two young actors — one playing a character unable to hear, and the other largely bedridden and motionless. To find a young actor with that extraordinary screen presence required casting a worldwide net, says the director. “At one point we had a casting director in London, a casting director in L.A., a casting director in Canada and someone in Paris advising us as well. We really left no stone unturned.”

After the expansive search, Blackburn selected Charlie Heaton — a British musician from the East Yorkshire town of Bridlington, who had very little acting experience at the time. Heaton’s popularity has since soared, however, thanks to a starring role as the heroic Jonathan Byers in Netflix’s supernatural hit series “Stranger Things.”

Heaton’s casting came as a last-minute gift to the filmmakers, says Blackburn. “We were about a week from filming, and his self-made tape came through the door. I’m not sure his agent will appreciate me telling it, but this will be a great story when he’s a big superstar in a few years’ time. At first they sent a faulty recording —it was only a minute long. But I was so taken by Charlie and his potential in that one minute that I called Tory and said straightaway, ‘We have to get him over to Montreal,’ where I was in pre-production.” According to Hodson, the video, despite its brevity, had a powerful impact on everyone who watched it.

The role of Tom went to Jacob Tremblay, who became an awards-season favorite in 2015 after his breakthrough role as Jack, the imperiled young boy in Room. The Vancouver-born actor was only 8 when he shot Shut In. Although the film is a thriller with adult themes, Tremblay says the scariest moment may not have been captured by the camera. “There’s this scene we filmed where I was hiding and she had to scream,” he recalls. “But when Naomi screamed, it scared me! So then she was saying, ‘Oh, my gosh. I’m so sorry!’ We were both laughing. She’s very nice and kind.”

Shut In was shot throughout March and April of 2015. The majority of the exterior locations and some interiors were filmed during 12 days in Sutton, one of the major ski resorts in the Eastern Townships of Quebec, about 70 miles southeast of Montreal. The next 19 days of filming took place at sound stages in Burnaby, British Columbia, just outside Vancouver, and at nearby Deer Lake, which served as the location for the film’s climactic scene.

Perhaps the biggest challenge the filmmakers faced during the shoot was the frigid weather in Quebec, says Blackburn, who notes that temperatures of negative 20 degrees are difficult for even the most experienced production professionals. “Your brain and your body just want to shut down.”

Ironically, when the crew needed winter weather, Mother Nature did not cooperate. That was the case for a scene in which Dr. Wilson drives through a blizzard to Mary’s aid.“While for most of the Montreal shoot it was subzero temperatures and snowing, on this particular day it was not,” laughs Blackburn. “We had to bring in our own snow.”