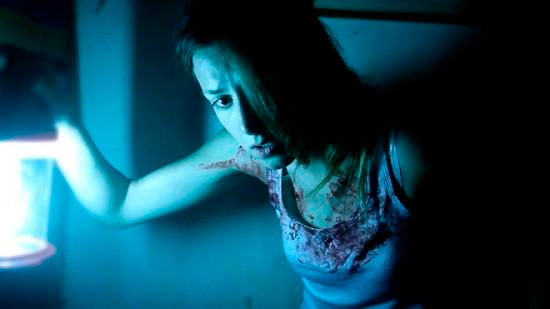 The art of cinematic frights is one that has been refined over the last century. Filmmakers have adapted to an evolution of storytelling techniques and tools to deliver heightened suspense – editing, visuals, atmosphere and sound effects, it’s a strenuous manipulation of various factors to set an audience on the edge of their movie theater seat. 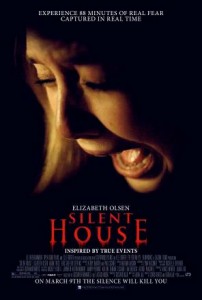 Silent House is a remake of the 2010 Uruguayan film The Silent House.

Strip away some of those principle accoutrements of scare-making, however, and you have SILENT HOUSE.  A re-imagining of the Uruguayan film LA CASA MUDA, SILENT HOUSE cleverly deconstructs our perception of how one makes a taut, unnerving thriller in real time.

Akin to Alfred Hitchcock’s 1948 film ROPE, SILENT HOUSE is told in a continuous camera shot, following Sarah (Elizabeth Olsen) and the horrifying ordeal she encounters at a summer home over the course of an evening.  Where Sarah goes, the camera follows…and so does the audience as she tries to make sense of memories from her past and the mysterious figure stalking her.

Taking on this unique challenge are directors Chris Kentis and Laura Lau, a duo no stranger to projects calling for tricky production preparation.  In 2004, they tackled the shark-infested OPEN WATER.  Through SILENT HOUSE producer Agnès Mentre, Kentis and Lau became acquainted with LA CASA MUDA and, together, they jumped at the possibilities an English-language remake presented.

Star Elizabeth Olsen agrees the inclusion of a continuous shot device adds an extra, hopefully invisible layer to the type of scares audiences are accustomed to and are achieved through editing.  “It’s a new way of creating those jumps, like, what you would get cutting to a door slamming, or seeing curtains over an open window blowing, or cutting to a girl screaming.  We just don’t use those editing devices and I find that exhilarating.  I don’t think people are going to pick up on the fact there are no cuts or that it’s all just one take.  People don’t think twice about that, they’re just into it.  What’s special is that this is a whole new way of storytelling.”