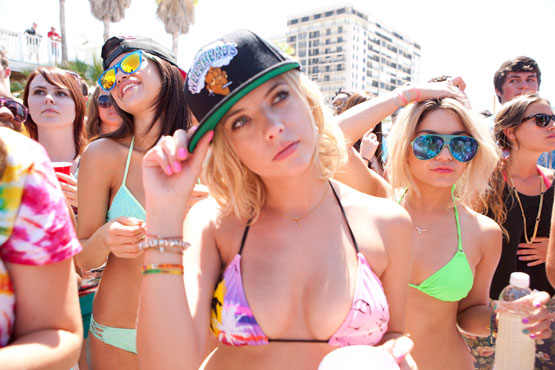 From visionary writer/director Harmony Korine, comes a bold new vision of the seasonal American ritual known as spring break — the bacchanalia of bikinis, beach parties and beer bongs that draws hordes of college students to the Florida coast and elsewhere each year. 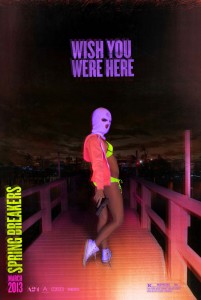 Brit (Ashley Benson), Faith (Selena Gomez), Candy (Vanessa Hudgens) and Cotty (Rachel Korine) are best friends anxious to cut loose on their own spring break adventure, but they lack sufficient funds. After holding up a restaurant for quick cash, the girls head to the shore in a stolen car for what they discover is the party of a lifetime.

Writer-director Harmony Korine forged an evocative world of low-lifes, lovers and holy fools, gleaning unexpected textures from everyday outcasts whose lives verge on the oddball or surreal. “I never cared so much about making perfect sense; I wanted to make perfect nonsense,” Korine famously quipped. But with Spring Breakers, Korine explodes into bold new terrain with a no-less visionary take on the time-worn tradition of American college kids going wild on spring vacation.

During the pre-production phase Korine traveled to St. Petersburg, Florida, the second-largest city in the Tampa Bay Area, affectionately known by its denizens as St. Pete, and awash in sunshine for an average of 360 days a year. Located on a peninsula between Tampa Bay and the Gulf of Mexico, it’s considered the dividing line between mainland Florida to the north and metropolitan Tampa to the east.

When it came time to cast Spring Breakers, Korine opted for marquee stars over his usual preference for unknowns and non-professionals. Korine and James Franco had discussed working together for years, on a film about glue-sniffers. He brought in Korine for a section of the project and they shot a short film together in one day. “It was great, I already got along with him, but I think we realized that we worked really well together on set too,” Franco recalls. “One day he said, we’re going to do Spring Breakers together. I’m going to go write it, and I’ll be back.”

James Franco says of his female co-stars. “The actresses are not like their characters — but I think they understood their characters well enough that they could also relax and be natural on set. I thought it was perfect casting because it really gives it that mix of pop culture and independent filmmaking. I had a blast working with all of them and I think they were hungry to be able to do a project like this.”