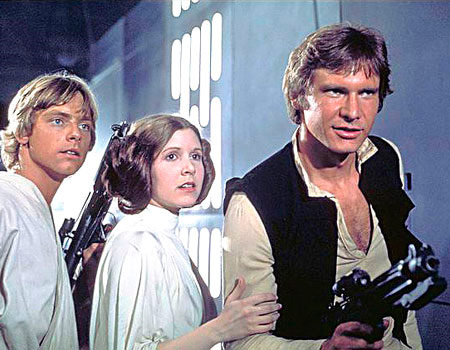 Star Wars, later retitled Star Wars Episode IV: A New Hope, is an epic 1977 American space opera film, written and directed by George Lucas. It is the first of six films released in the Star Wars saga: two subsequent films complete the original trilogy, while a prequel trilogy completes the six film saga. Ground-breaking in its use of special effects, unconventional editing, and sci-fi/fantasy storytelling, the original Star Wars is one of the most successful and influential films of all time. 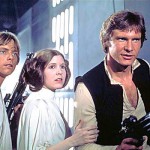 When Star Wars filming began on March 22, 1976 in the Tunisian desert for the scenes on the planet Tatooine, the project faced several problems. Lucas fell behind schedule in the first week of shooting due to a rare Tunisian rainstorm, malfunctioning props, and electronic breakdowns.

Set “a long time ago in a galaxy far, far away”, the film follows a group of freedom fighters known as the Rebel Alliance who are plotting to destroy the powerful Death Star space station, a weapon capable of destroying a planet, created by the evil Galactic Empire. This conflict disrupts the isolated life of farmboy Luke Skywalker when he inadvertently acquires the droids carrying the stolen Death Star plans.

When the Empire begins a cruel and destructive search for the droids, Skywalker decides to accompany Jedi Master Obi-Wan Kenobi on a daring mission to rescue the owner of the droids, rebel leader Princess Leia Organa, and save the galaxy.

Produced with a budget of $11 million and released on May 25, 1977, the film went on to earn $460 million in the United States and $337 million overseas, surpassing Jaws as the highest-grossing film of all time at the time. Among the many awards the film received, it gained ten Academy Award nominations, winning seven; the nominations included Best Supporting Actor for Alec Guinness and Best Picture.

Lucas has re-released the film on several occasions, sometimes with significant changes; the most notable versions are the 1997 Special Edition and the 2004 DVD release, which have modified computer-generated effects, altered dialogue, and added scenes.

Elements of the history of Star Wars are commonly disputed, as Lucas’ statements about it have changed over time. George Lucas completed directing his first full-length feature, THX 1138, in 1971. He has said that it was around this time that he first had the idea for Star Wars, though he has also claimed to have had the idea long before then.

One of the most influential works on Lucas’s early concepts was the Flash Gordon space adventure comics and serials. Lucas even made an attempt to purchase the rights to remake Flash Gordon at one point, but could not afford them. Friend and collaborator Walter Murch suggested in an interview that Star Wars was Lucas’ “transubstantiated version of Apocalypse Now“; at one time, Lucas had planned to direct that film.