Stone (2010) is an  film thriller directed by John Curran and starring Robert De Niro, Edward Norton and Milla Jovovich. Most of the filming was done in Washtenaw County, Michigan. 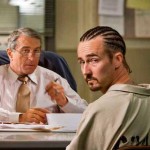 Stone was screened at the Toronto International Film Festival, where it received mixed reviews as well as a number of raves. The cast received unanimous praise for their performances.

The film was directed by John Curran, from a screenplay by Angus MacLachlan. Originally written by MacLachlan in 2000 as a play, it has been performed once, in 2003 as a staged reading. In 2005, MacLachlan turned it into a screenplay aiming for a 2010 release.

The film was overseen by Mimran Shur Pictures, with the aid of producer Holly Wiersma. Stone is the debut of Mimran Shur Pictures, formed in 2010 by private investor David Mimran and long-time music business executive and former Geffen Records President Jordan Schur. Stone Productions, the film’s production company, also aided in the production of the film.

Mast Road, in Dexter, was closed for several weeks while the farmhouse scenes were shot at the historic Mast Farm house; and, at the end of the shoot, it was burned down.

Filming was interrupted on June 5, 2009, when an intoxicated woman, who said she was a fan of Robert De Niro , got past security and accosted him. She was arrested and admitted to a local hospital. It is unknown whether she faced criminal charges.