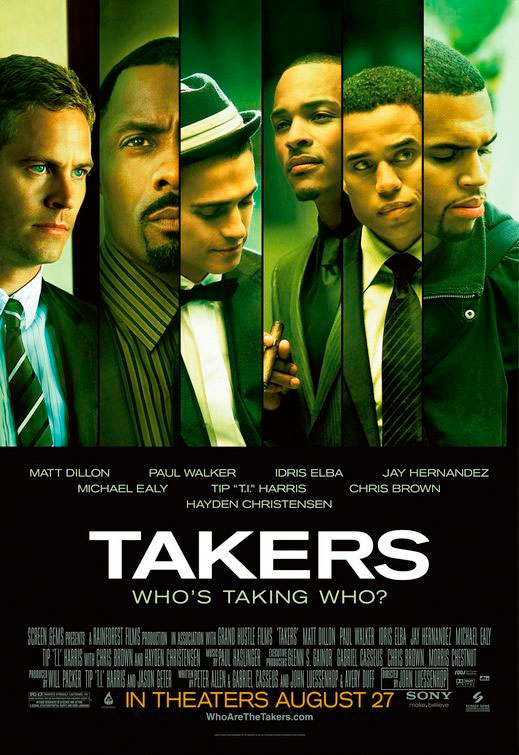 A group of professional bank robbers (Michael Ealy, Chris Brown, Hayden Christensen, Paul Walker, Idris Elba) who specialize in spectacular robberies, are pulled into one last job by a recently paroled cohort (T.I) only to be pitted against a hard-boiled detective (Matt Dillon) and his partner (Jay Hernandez) who interrupt their heist.

The film was number one at the box office during its opening weekend, making $20,512,304. Takers made its US debut on approximately 2,600 screens at 2,206 locations. According to Box Office Mojo, “The heist thriller tripled the start of Armored, and it came in only a bit behind last summer’s higher-profile The Taking of Pelham 123. Its initial attendance was also nearly 50 percent greater than similar titles like Dead Presidents, ATL and Street Kings.” Takers was made available on Blu-ray Disc and DVD on January 18, 2011.

According to humormillmag.com Screen Gems is planning on producing a prequel to Takers. The prequel will be about how the crew all came together, also it will show how TI’s character would end up in jail and lead up to the original film.