Christian Wolff (Ben Affleck) is a math savant with more affinity for numbers than people. Behind the cover of a small-town CPA office, he works as a freelance accountant for some of the world’s most dangerous criminal organizations. With the Treasury Department’s Crime Enforcement Division, run by Ray King (J.K. Simmons), starting to close in, Christian takes on a legitimate client: a state-of-the-art robotics company where an accounting clerk (Anna Kendrick) has discovered a discrepancy involving millions of dollars. But as Christian uncooks the books and gets closer to the truth, it is the body count that starts to rise. 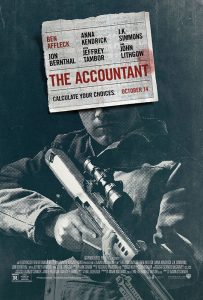 In the Accountant movie, the Gwinnett Jail in Lawrenceville, Georgia, doubled as Leavenworth, where Christian Wolff is schooled in the fine art of black money accounting by Tambor’s Francis Silverberg. The interior of the Treasury offices were located inside Atlanta’s Academy of Medicine. A farm near Bishop, Georgia, became the rural home of Frank and Dolores Rice, where Chris temporarily finds a welcoming home away from home.

The spark for the story initiated with producer Mark Williams, who explains, “I had heard the term ‘forensic accountant’ and thought it sounded like a detective of some sort. But then I started pushing the envelope, raising the stakes with who he’s working for and that had the potential to kick the action into high gear. Once I had the general framework in my head, I took it to Bill Dubuque, who is a writer I’ve worked with before and is flat-out great. He responded to the idea and started fleshing out the script.”

Producer Lynette Howell Taylor says, “Bill created a fantastically written screenplay. I had never read anything like it before and found it completely unpredictable, which is always a good sign. There were twists that took me by surprise and I had a couple of gasp moments. That’s what ultimately made me want to make the movie.”

With the script in hand, the producers chose director Gavin O’Connor to helm “The Accountant” after meeting with him and finding “he had a deep understanding of these characters and a vision for how to shoot their interwoven storylines,” Williams recalls. “We knew he was the perfect director for this. He has such a fine eye for detail and kept track of all the puzzle pieces so they would all fit together in the end, which was very important for this film.”

Prior to the start of filming, O’Connor and Affleck engaged in research they knew was essential to make sure they got Afleck character right. The two consulted with several autism experts, including Dr. Neelkamal Soares, Laurie Stephens, Cheryl Klaiman, Christine Hall and Shelley Carnes. They also visited a number of homes and schools. “I was lucky,” Affleck says. “I had my director doing research with me, which gave us a shared vocabulary and made it a lot easier.”

Setting up in the company’s glass-walled conference room, Chris meets Dana Cummings, the junior accountant who uncovered the problem. Anna Kendrick, who plays the role, confirms, “Dana is the one who first noticed that something isn’t adding up in the company finances.”

Taylor offers, “Casting somebody with the kind of gravitas J.K. Simmons has was essential for the role of Ray King. Ray King is a very multi-layered character—you don’t know what his motives are for much of the movie—and J.K. conveys all that in his superb performance.”

O’Connor notes that Addai-Robinson won the Marybeth role over numerous other hopefuls. “I must have seen more than a hundred actresses for Marybeth. But when Cynthia came in, I said to the producers, ‘I think she’s the one.’ She’s a terrifically talented actress and I was really happy to have her in the movie.”

Gavin O’Connor knew that Christian Wolff should have an idiosyncratic fighting style, forged by his childhood training and his personal penchant for order. Conferring with stunt coordinators Sam Hargrave and Fernando Chien, the director explored various types of martial arts. Nothing quite fit the bill until they showed him an Indonesian method that is less widely known, called pentjak silat. Hargrave and Chien, together with their stunt team, started training Affleck, keeping in mind O’Connor’s desire to mirror Chris’s persona in the action. “This martial arts technique hasn’t been seen in too many movies before so it felt fresh and new,” Affleck says.

Chien acknowledges that Affleck, who came into the film right after portraying Batman, was already in fighting shape—just not in the same way that Christian had to be. “For that film, he became really buff and muscular, but this character needed to be slick and more quick—very direct and explosive—so we did more martial arts conditioning with a lot of dynamic movements.”

Apart from his physical prowess, Christian is also an expert marksman, capable of taking out a target from a considerable distance. Stuntman Thayr Harris was largely responsible for teaching Affleck how to handle any gun like a pro, with safety being the top priority.

“The Accountant” was filmed in and around Atlanta, Georgia, where the filmmakers utilized a number of locations, as well as a soundstage in nearby Decatur. One of the main sets built on the stage was the interior of Christian Wolff’s moveable home: a sleek, silver Airstream trailer kept secreted away in a huge storage locker.

The campus of Georgia Tech served as the location for the ultra-modern headquarters of Living Robotics, with its centerpiece being a large conference room with glass walls that become Chris’s canvas.

When filming wrapped, O’Connor reunited with composer Mark Isham, with whom he had collaborated on three films, including “Miracle” and “Warrior,” to score “The Accountant.” Isham expresses that he wanted to capture Christian’s unique persona in the music, stating, “He is a mathematical prodigy who lives in a world of numbers and numeric patterns, and I wanted the score to reflect that. Parts of the music were created using a series of simple patterns with competing tempos and enough randomness to create texture and nuance.”