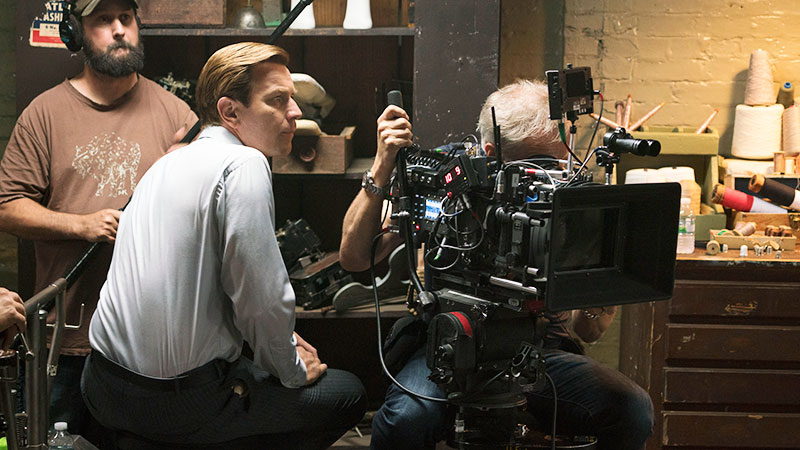 Ewan McGregor makes his directorial debut and stars as Seymour “Swede” Levov, a once legendary high school athlete who is now a successful businessman married to Dawn, a former beauty queen. But turmoil brews beneath the polished veneer of Swede’s life. When his beloved daughter, Merry, disappears after being accused of committing a violent act, Swede dedicates himself to finding her and reuniting his family. What he discovers shakes him to the core, forcing him to look beneath the surface and confront the chaos that is shaping the modern world around him: no American family will ever be the same. 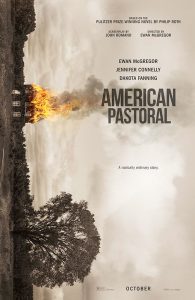 Screenwriter John Romano, who has holds a Ph.D. in Literature and has taught English at Columbia University, was drawn to a story that not only spans one of the most dizzying periods of transition in American life—from the post-WWII positivity and conformity of the late 1940s through the uncorked turmoil and disruption of the 1970s—but also moves between huge historical events and their entwining with the most private family moments. “I knew the book well and thought it was the best book about the sixties written from the perspective of the Vietnam War revolution on the home front,” recalls Romano.

Ewan McGregor, the two-time Golden Globe® nominee known for his wide-ranging roles in films, was attached to play the central character of the Swede in American Pastoral long before signing on to direct the film. Ultimately, it was his love of the material that led to his decision to take a leap into his feature film directorial debut. “I was very moved by the script and I was completely taken by the Swede and the study of father daughter relationships,” he says.

Recalls producer Gary Lucchesi: “It wasn’t as crazy as Ewan thought it was because we had already gotten to know him and we knew his passion for the project and also had really come to see him as an artist. Tom (produecr Tom Rosenberg) and I sat down with Ewan and had long conversations with him, and at a certain point we realized this was the director we were going to bet on. It was one of the best decisions we made.”

The actors were equally exhilarated to work with him in this new way. “It was my first time with an actor who was also directing the film and I could not have asked for a better experience than with Ewan,” says Dakota Fanning. Adds Uzo Aduba: “Ewan is a generous director, able to communicate his vision to actors in a very clear and specific way, which is incredibly useful. He’s willing to let you try anything without judgment.”

As he was prepping production, McGregor was also working to get under the skin of the film’s multifaceted and unravelling lead character.

To take on the demanding and complex role of Dawn, the filmmakers’ first choice was always Jennifer Connelly, the Academy Award® winning actress acclaimed for her emotionally nuanced performances in A Beautiful Mind, House of Sand and Fog and Requiem for a Dream. The producers first approached her eight years prior to the film going into production. Connelly immediately expressed interest – and she remained committed throughout the long development process. “Jennifer was always our Dawn,” says Rosenberg, “and she kept the faith.”

Working closely with McGregor and Connelly is Dakota Fanning in the pivotal role of the teen-aged and adult Merry Levov, who detonates her family’s bucolic life when she becomes a wanted terrorist while still just an adolescent. “We tried to imagine all of the young actresses who might have the ability and the gravitas this role requires,” recalls Lucchesi of the search for Merry.

A different side of the Swede is seen at the Newark Maid Glove factory where he takes pride in hiring members of the local community. Playing the factory’s stalwart forewoman, Vicky, who becomes a major influence on the Swede, is two-time Emmy Award® winner Uzo Aduba, known for her role on Netflix’s Orange is the New Black. Aduba was especially excited to bring Vicky’s perspective into the mosaic of American Pastoral. “You get to watch through Vicky’s lens how the country is shifting and see her evolve from where she’s been as a citizen in the country,” she says. “She finds her own voice and power.”

American Pastoral’s narrator, who learns the fate of the Swede from his brother at a high school reunion, is author Nathan Zuckerman. Embodying the part is David Strathairn, an Academy Award® nominated actor for his leading role in Good Night, and Good Luck. McGregor praises Strathairn’s presence both on and off-camera: “I love David Strathairn’s work and Nathan is another very tricky role, but he’s so wonderful, I could just watch him for days and days. He’s a true gentleman and a wonderful actor.”

One of the most difficult roles to cast was that of Rita Cohen, the puzzling, provocative political radical who becomes the Swede’s only connection to Merry as he tries to track her down. The filmmakers spent months searching for the right actor to fill the challenging role, and it wasn’t until production was looming that they found their Rita Cohen in Valorie Curry, an up-and-comer who has been seen in the television series House of Lies and The Following.

Production designer Clancy took particular inspiration from the American painter Edward Hopper, known for his iconic realist portraits of Mid Century America that were nevertheless full of moody mysteries and longing. McGregor was already heading in the same direction.

Shooting in the industrial city of Pittsburgh, standing in for New Jersey, also helped to establish authenticity. “Pittsburgh is extremely cinematic and you can find the kind of decay and really good urban factory looks we were searching for,” says Clancy. “We were able to use a lot of practical locations—and I don’t think you can beat real locations to give the film that patina.”