Coming to America is a 1988 comedy film directed by John Landis. The screenplay was written by David Sheffield and Barry W. Blaustein, from a story by Eddie Murphy, who also stars in the film. Murphy plays an African prince, who heads to the United States in hopes of finding a woman he can marry. Coming to America is the first of several films in which Murphy plays multiple characters. 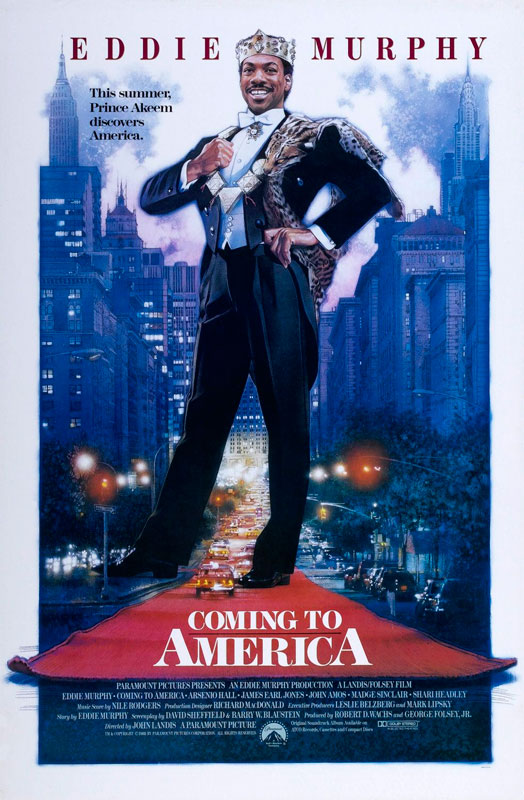 The movie Coming to America was the subject of the Buchwald v. Paramount civil suit, which the humorist Art Buchwald filed in 1990 against the film’s producers on the grounds that the film’s idea was stolen from a 1982 script that Paramount had optioned from Buchwald. Buchwald won the breach of contract action and the court ordered monetary damages. The parties later settled the case out-of-court prior to an appeal going to trial.

Coming to America reunited star Eddie Murphy with director John Landis. The two had previously worked together on the comedy hit Trading Places (1983); however, Landis later recalled the differences in working with Murphy on the two movies: “The guy on Trading Places was young and full of energy and curious and funny and fresh and great. The guy on Coming to America was the pig of the world… But I still think he’s wonderful in the movie.” Despite the experience, Landis and Murphy collaborated again six years later on Beverly Hills Cop 3.

Coming to America features Murphy and Arsenio Hall in several different roles, which following the success of this film, became a Murphy staple. Hall plays Reverend Brown, who introduces Randy Watson (Murphy) and his band Sexual Chocolate, who perform “Greatest Love of All” at the Black Awareness Rally. Randy Watson is introduced as having portrayed Joe the Policeman in the “What’s Goin’ Down” episode of That’s My Mama.

In the barbershop scenes, Eddie Murphy and Hall play elderly barbers Clarence and Morris, who engage in furious debate with Saul, the old Jewish man, (played by Eddie Murphy) about the boxing skills of Joe Louis, Cassius Clay and Rocky Marciano.

One scene includes Cuba Gooding Jr., who does not speak, and the barber scenes are notable because Murphy plays both Akeem and Clarence simultaneously (seemingly giving himself a haircut).

Saul calls Akeem “Kunta Kinte”, referring to the Roots character made famous by LeVar Burton; co-star John Amos played the adult Kunta Kinte later in the Roots series. Hall also plays a woman who comes on to Akeem and Semmi at a nightclub. Sitting next to Akeem, she tells him “I wanna tear you apart,” then looks over at Semmi and adds, “and your friend, too.” Akeem frowns at the suggestion while Semmi spits out his drink.