Megamind is a 2010 animated comedy film produced by DreamWorks Animation and Red Hour Productions and distributed by Paramount Pictures. The film was released in the United States in Digital 3D, IMAX 3D and 2D on November 5, 2010. It features the voices of Will Ferrell, Tina Fey, Jonah Hill, David Cross and Brad Pitt. The film is directed by Tom McGrath. 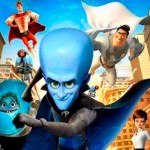 Megamind (Will Ferrell) is a super-intelligent alien who– at the age of eight days old– is sent to Earth from his home planet during a time of crisis. However, he lands in a prison thanks to another infant alien similarly sent from a different planet who eventually becomes a superhero known as Metro Man (Brad Pitt), defender of the fictional Metro City.

As a result, Megamind is raised as a social deviant neglected for his destructive intellect, with his fish-like sidekick Minion (David Cross) as his only friend. Realizing that he enjoys causing trouble, and jealous of all of the attention Metro Man receives, Megamind becomes a super villain to rival Metro Man, though he is thwarted on a regular basis.

The film was first titled Master Mind and then Oobermind. Lara Breay and Denise Nolan Cascino were the film’s producers, and Ben Stiller and Stuart Cornfeld were the executive producers. Ben Stiller was originally cast as Megamind, and later Robert Downey, Jr., but Will Ferrell was given the role, due to “scheduling conflicts” for Downey.

The film is written by Alan J. Schoolcraft and Brent Simons.