Good Hair is a 2009 American documentary comedy film produced by Chris Rock Productions and HBO Films, starring and narrated by comedian Chris Rock. Premiering at the Sundance Film Festival on January 18, 2009, Good Hair was released to select theaters in the United States by Roadside Attractions on October 9 of the same year. 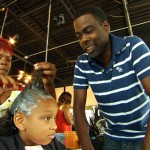 According to Rock, he was prompted to make the movie after his 5-year-old daughter Lola asked him, “Daddy, how come I don’t have good hair?” During the film, Rock delves into the $9 billion black hair industry, and visits such places as beauty salons, barbershops, hair styling conventions, scientific laboratories (to learn the science behind chemical relaxers that straighten hair).

Rock intended for the film to uphold a sense of seriousness, yet at the same time remain humorous. The movie features interviews from hair care industry businesspeople, stylists (Derek J, Jason Griggers and others) and their consumers, and celebrities such as Ice-T, Nia Long, Paul Mooney, T-Pain, Raven-Symoné, Maya Angelou, KRS-One, Salt-n-Pepa, Kerry Washington, Eve, Reverend Al Sharpton, and Meagan Good as they discuss their own experiences with their hair, and how black hair is perceived in the black community.