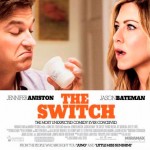 The Switch’s plot, involving artificial insemination by donor, has similarities to The Back-up Plan, which was filmed at approximately the same time, and followed in the wake of Baby Mama, which involved surrogacy.

The Switch, formerly titled The Baster, is a romantic comedy-drama film starring Jennifer Aniston and Jason Bateman. Will Speck and Josh Gordon (Blades of Glory) directed the comedy from the screenplay written by Allan Loeb. The film is based on the short story “Baster” by Jeffrey Eugenides. Filming began in March 2009 and ended in May 2009. Re-shoots took place in October 2009.

Kassie Singleton (Jennifer Aniston) decides she wants to have a baby. Despite the objections of her neurotic best friend Wally (Jason Bateman), she chooses to do it alone, with the services of handsome and charming sperm donor Roland (Patrick Wilson). Wally has always had feelings for Kassie, but as his friend (Jeff Goldblum) points out, he missed his chance and she put him in the “friend zone”.

But things don’t go to plan, as Wally gets so drunk at Kassie’s “insemination party” that he accidentally spills Roland’s semen and replaces it with his own. Seven years later, Kassie returns to New York along with precocious-but-neurotic son Sebastian (Thomas Robinson). Wally forms a bond with this loveable mini-version of himself, but the bad news is that Roland is in the picture too.

The Hobbit: An Unexpected Journey