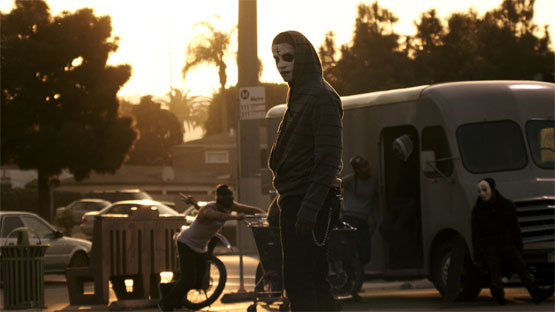 A speculative thriller that shows us what occurs during The Purge outside of the confines of a suburban neighborhood, The Purge: Anarchy returns us to a dystopic future. Our government, now re-engineered by the New Founders of America (NFA), has sanctioned its annual 12-hour Purge to ensure that the crime rate stays below one percent for the rest of the year. With police and hospitals suspending help, it’s one night when the citizenry regulates itself without thought of punishment or fear of retribution. 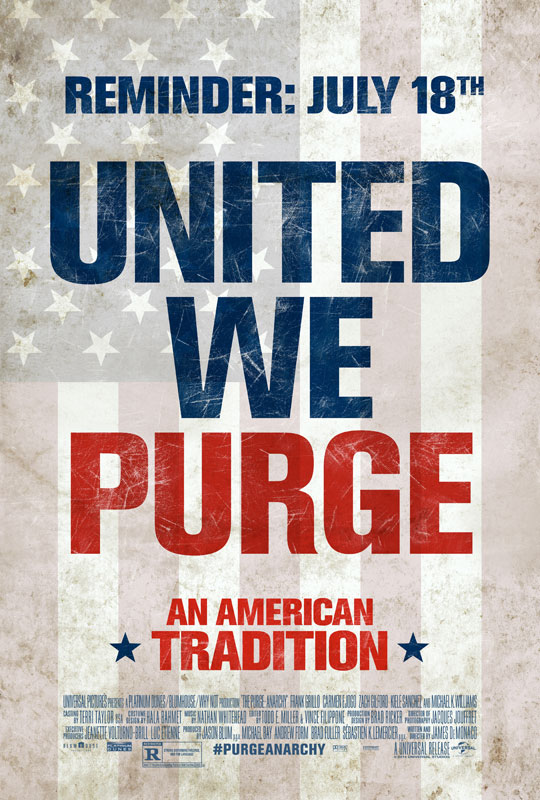 Filming in the streets of downtown Los Angeles lent itself to the gritty world of The Purge: Anarchy.

As evidenced by the success of The Purge, audiences were fascinated with the concept and asked themselves, “What if this happened in my neighborhood?” Still, for writer/director James DeMonaco and producer Sébastien K. Lemercier, the thriller was originally intended to be a smaller film that served as a commentary on society. Truly, DeMonaco is the first to admit that he wants his films not only to entertain, but to start a conversation. He reflects: “With this series, I’m hoping to reflect something in American society about how we look at violence. It’s very different than other places in the world. We’ve found that audiences leave the theater talking about our relationship with violence as a society.”

Prior to casting, filmmakers were clear that this wouldn’t be a genre piece that sacrifices character development. Therefore, it was important to spend the first 20 minutes of The Purge: Anarchy providing audiences with an intimate look into each character’s situation. Says DeMonaco: “I said, ‘If we’re going to do this, let’s get to know these people.’ I figured, if we don’t care about them up front, we’re not going to care about who lives or dies. I don’t want sacrificial lambs who could be randomly killed on this night.”

DeMonaco had previously worked with Frank Grillo on the miniseries The Kill Point, so casting the actor as the gritty and resourceful Leo was a goal. Grillo fit the mold and then some. Grillo describes coming on board the speculative thriller: “I was heading to L.A. for a trip, and James called me and said he was working on a sequel to The Purge. He described it to me before I’d even read the screenplay, and it sounded like an old Western…like The Outlaw Josey Wales. I thought it was interesting and provocative, and after he sent me the script, I was sold.”

After locking in Grillo, filmmakers sought out actress Carmen Ejogo to portray Eva, a passive working mother who looks to her daughter, Cali, for strength. The actress appreciated that the script had something meaningful to say. For Cali, filmmakers looked no further than up-and-comer Zoë Soul. After filming another thriller, Prisoners, Soul was interested in exploring the genre.

Ready to expand on the world he created, one with a sanctioned Purge that explodes into the streets of the city, DeMonaco and the producers assembled a talented below-the-line team to imagine the outside world they envisioned. Production designer Brad Ricker and his team designed the dystopian look in Los Angeles by utilizing houses and streets around the city and only building sets when necessary. For example, the Hunt Club was built in a warehouse in downtown Los Angeles and Eva and Cali’s apartment was in an actual building, also in downtown Los Angeles.