The Green Hornet is a superhero film, based on the character of the same name that had originated in a 1930s radio program and has appeared in movie serials, a television series, comic books and other media. Directed by Michel Gondry, the film stars Seth Rogen, who co-wrote the screenplay with Evan Goldberg. Supporting actors include Jay Chou as Kato, Christoph Waltz, Cameron Diaz, Edward Furlong, Edward James Olmos, David Harbour and Tom Wilkinson. 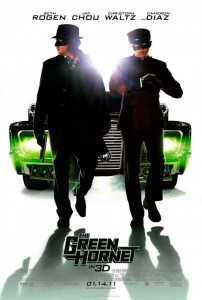 The Green Hornet: Following the death of his father, Britt Reid, heir to his father’s large company, teams up with his late dad’s assistant Kato to become a masked crime fighting team

Britt Reid (Seth Rogen), the son of wealthy newspaper publisher James Reid (Tom Wilkinson), is a ne’er do well playboy who inherits a media empire after his father dies. One day, he meets an employee named Kato (Jay Chou), who is more than he appears. After realizing how he and Kato are not using their abilities to the fullest, Britt decides that the two should become crimefighters, taking on the identity of the Green Hornet. With the help of his new secretary, Lenore Case (Cameron Diaz), Britt discovers that Russian criminal Benjamin Chudnofsky (Christoph Waltz) controls the city’s criminal underworld.

Meanwhile, Chudnofsky, paranoid that he is losing his edge as a crime boss, has united all of the gangs of the city and seeks the Green Hornet, believing him to be a direct threat to his elaborate grand plan.

Producer Neal H. Moritz considered filming The Green Hornet in Detroit, Michigan; New York City and Louisiana, but ultimately chose Los Angeles, California, as the primary location shooting. “Ultimately, we made the decision, and thankfully the studio agreed with us, that the creative positives of shooting in Los Angeles outweighed the tax incentives offered to us elsewhere,” Moritz said.

Principal photography began at Sony Pictures Studios in Culver City, California on September 2, 2009 for one week. Filming then moved to Chinatown, Los Angeles for scenes featuring Kato’s apartment. Through November, other locations included Sun Valley, Holmby Hills, Bel-Air, Hawthorne and various locations downtown, including City Hall and the Los Angeles Times Building, which stands in for the newspaper where Britt Reid works.

The production modified 29 Chrysler Imperials from model years 1964 to 1966 to portray the Green Hornet’s luxurious supercar, the Black Beauty.