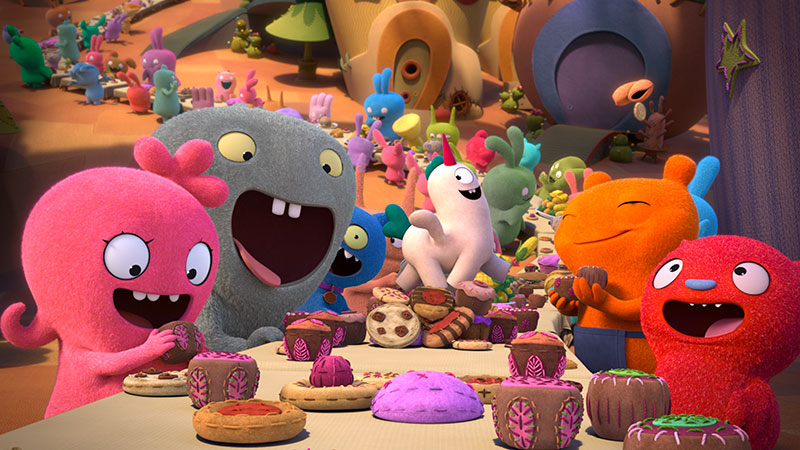 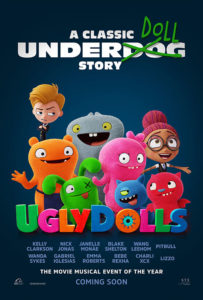 Mixing fun, music, and adventure, with characters and worlds unlike any audiences have experienced, UGLYDOLLS extols acceptance, diversity,
empowerment, joy and friendship – and being the best version of yourself you can be.

There are countless UglyDoll residents in Uglyville, but the film focuses on six friends who embark on a colorful and transformative adventure where they – and everyone else across two disparate worlds – will learn how to embrace what’s special and different about each of us.

We meet Moxy, a vibrant, energetic and determined force of nature with a goofy but wonderful three-toothed smile and an odd flower-like thing on her head. She’s not going to let anything deter her from pursuing her dreams. Her best pal is UglyDog, a blue canine with one yellow eye and a tough, streetwise niceness. Ox is the town’s unofficial “mayor,” as well as its founder / father figure / protector; he always wants the UglyDolls to feel nurtured and safe. Lucky Bat is the wisest doll in town but his advice doesn’t always work out as he planned, and Wage is a cynic and voice of reason who likes to play it safe. Babo is the “muscle” of the group, whose infectious positivity makes him the guy you want on any road trip.

To inhabit these motley and lovable characters, the filmmakers envisioned what producer Oren Aviv calls an “Ocean’s 11 with music stars,” adding that all the film’s headliners immediately connected to the story’s themes of inclusivity and the importance of being true to oneself.

Moxy is voiced by singing sensation and songwriter Kelly Clarkson. The pairing of Clarkson with the role seemed to be destined. While Clarkson admits that she once dreamed of playing Disney princesses, a determined doll with an offbeat smile had other plans for her. Clarkson fell in love with Moxy, her first lead animated role, which she says “Moxy’s personality is almost identical to my own. She is 100 percent all the time. Moxy is very optimistic, and hopeful. I really leaned into our similarities during the recording sessions. I loved playing a character that is a positive role model and reminds us that we all come in different shapes, sizes and personalities, and that uniqueness is to cherished.” “Also, Moxy is pink, which my daughter was very excited about because it is her favorite color.”

It’s no coincidence that Moxy’s closest pal, UglyDog, looks like the musician Pitbull, who voices the role. Says Aviv: “We thought it was a fun idea to get Pitbull to play a character known as UglyDog. He loved the idea and signed on early.”

Pitbull also identified with his canine alter-ego. “UglyDog is basically me – someone who likes to get loose and enjoy life. He doesn’t care what anyone else thinks of him. UglyDog wants to help others and always sees solutions to any problem.”

It was Clarkson who suggested that her friend and fellow music icon Blake Shelton voice the role of Ox, Uglyville’s leader, who joins her on the quest despite his doubts about anything existing outside of Uglyville. Unlike his onscreen persona, Shelton didn’t need much convincing. “It was a fun experience bringing Ox to life in his colorful, misfit world,” notes Shelton.

Wanda Sykes brings her unique comedic voice to the character of Wage, whose insistence on playing it safe leads her to think that Moxy’s dream of a land outside of Uglyville is just that – a dream. Lucky Bat is voiced by singer, songwriter, music producer, actor and film director Wang Leehom, who is known as the “King of Chinese Pop” and is the best-selling Mandarin-language musician of his generation. Babo’s lovable, bigger-than-life personality is captured by actor-comedian Gabriel Iglesias, who connected to the film’s ideas about what it means to be different.

In addition to that sextet of friends, audiences will also meet a new Uglyville arrival, Wedgehead (voiced by Emma Roberts), so named because her dramatic introduction to the community sees her plummeting from the sky above – and landing safely on her noggin.

The UglyDolls’ road to movie stardom began about 17 years ago, when David Horvath, an illustrator, comics artist and toy designer, then based in Los Angeles, sent some letters to his girlfriend (now, wife) Sun-Min Kim, who was living in South Korea at the time. The letters also included some endearing character drawings, which inspired Kim to hand-sew a gift for Horvath: an interpretation of one of his drawings, as a plush doll.

Delighted with Kim’s creation, Horvath shared it with the curator of a well-known Los Angeles-based specialty store, Giant Robot, who mistook Horvath’s enthusiasm for a pitch – and then promptly sold the doll and ordered 20 more. “Sun-Min hand-sewed another 20, named it ‘UglyDoll,’ and those also sold out immediately,” remembers Horvath. Even Kim’s purchase of a sewing machine was not enough to keep up with the increasing demand, which had now spread to other specialty stores across the U.S., so she found a factory that could ramp up production.

Aviv explains how UGLYDOLLS came together as a motion picture event. “STXfilms knew that this was an opportunity to bring a very special and beloved brand into the world, first as a theatrical animated feature and then as a television series, to which Hulu has committed, with strategic partnerships with McDonald’s, Carl’s Jr., Hasbro and Walmart, among other global brands. Most importantly, it was STX’s first animated feature and we were committed to doing right by the UglyDolls and preserving its themes of inclusivity and authenticity.”