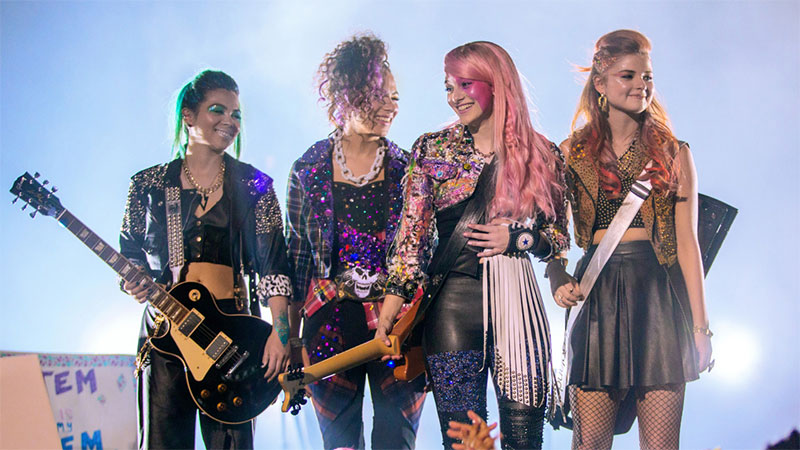 As a small-town girl catapults from underground video sensation to global superstar, she and her band of sisters begin a one-in-a-million journey of discovering that some talents are too special to keep hidden. 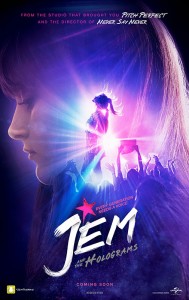 The youngest of five children who, admittedly and proudly, was “always in front of the television,” director Jon M. Chu has fond memories of the block of 1980s Hasbro cartoons, which included G.I. Joe, Transformers and Jem and the Holograms.

Jem and the Holograms, based on the iconic ’80s Hasbro animated television series. The idea of reinventing Jerrica and her sisters for the big screen has been a longtime passion project of director Jon M. Chu, who has had a deep attachment to Jem and the Holograms since he was a child. The filmmaker, who closely worked with Hasbro’s Brian Goldner and Stephen Davis on the studio’s 2013 smash G.I. Joe: Retaliation, has also had a years-long professional relationship with blockbuster producer Jason Blum of Blumhouse Productions.

Director’s Chu first two feature films, Step Up 2: The Streets and Step Up 3D, gave him the know-how to shoot complex musical, dance and action sequences, while his helming of Justin Bieber’s two hit documentaries, Never Say Never and Believe, taught him the ins and outs of making the behind-the-scenes of the music industry accessible and exciting.

To accomplish this task, the director and his fellow producers turned to Ryan Landels. The producers asked him to pen the screenplay as an origin story. Shares Chu: “Ryan and his wife are huge fans of Jem, which is a big reason we had him come on board and start to develop the idea.”

When recruiting and casting the actress who would portray both Jerrica and Jem, Chu and his fellow producers had quite a task at hand. The performer who stood out among all others was Aubrey Peeples, who has starred as Layla Grant on ABC’s Nashville since 2013. The versatile singer, dancer and actress knew she was headed for an enormous task when she signed on to portray both Jerrica and Jem, but she was up for the challenge.

Chu provides a bit of insight into Peeples’ casting: “When we met Aubrey, we knew right away that she was the one. She wasn’t just a great singer, she had an old soul that’s rare to find in young actors today. She loves analog over digital, and she could care less about fame. Instead, she was all about honesty in her craft. She was everything we needed in our new Jem.”

Kimber is the keyboardist/keytar player of the Holograms, as well as the reason the world first met Jem. Stefanie Scott, who starred for three seasons as Lexi Reed on Disney’s A.N.T. Farm and recently appeared in Insidious: Chapter 3, was cast in the role. Shana is portrayed by Aurora Perrineau, who is a series regular on ABC Family’s Chasing Life, in which she portrays Margo. Last but not least, Hayley Kiyoko completes the Holograms as bassist Aja Leith. A badass kleptomaniac whose only low-tech obsession is her guitar, Aja expresses herself best when she’s on stage and wailing on her bass.

To make sure that Jem and the Holograms were perfectly in step at every move, the production leaned on choreographer CHRISTOPHER SCOTT, who also appears in the film in this role. Scott has worked with Chu and Landels since their days on The LXD, and he has served as choreographer of the last two films in the Step Up franchise.

The actor/choreographer acknowledges that, despite the fact that his cast was facile with their moves, rehearsal time was limited. He says: “Normally for a film that has artist development, we spend about a month working on performance basics—focusing on details such as how to hold the microphone, sing and walk. For this film, we only had a week of rehearsals before we started filming.”

As the film was lensed in and around Los Angeles, production designer Kevin Bird, who served as art director on The Bling Ring, decided on key places in Malibu (for Starlight Mansion), Van Nuys (Aunt Bailey’s house in Pineview), the Santa Monica Pier (where the girls discover the first missing piece of Synergy’s puzzle) and at soundstages in Los Angeles Center Studios.