The Dilemma is a comedy film written by Allan Loeb and directed by Ron Howard. The film is Howard’s first comedy film since 2000’s How the Grinch Stole Christmas. It stars Vince Vaughn, Kevin James, Jennifer Connelly, Winona Ryder, Channing Tatum, and Queen Latifah. The film will be produced by Howard and Brian Grazer of Imagine Entertainment, and will be distributed by Universal Pictures. 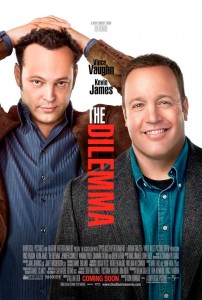 The Dilemma, directed by Ron Howard, tells a story about a man who discovers that his best friend’s wife is having an affair.

Longtime friends Ronny (Vince Vaughn) and Nick (Kevin James) are partners in an auto-design firm. They are hard at work on a presentation for a dream project that would really launch their company.

Then Ronny spots Nick’s wife out with another man , and in the process of investigating the possible affair, he learns that Nick has a few secrets of his own. As the presentation nears, Ronny agonizes over what might happen if the truth gets out.

Principal photography for the then-untitled project nicknamed Cheaters was in Chicago, Illinois and initially scheduled to take place from May 25 through August 6, 2010. Vince Vaughn “helped develop the film” and was “instrumental in getting it shot in Chicago.”

The first trailer was released in September 17, 2010, and was later pulled from airing due to controversy over a scene where Vince Vaughn’s character made fun of an electric car by saying “It’s gay.”

Director Ron Howard, who has final cut on the film, later told the Los Angeles Times there would be no change to the film, though he supported the change to the trailer.Winona Ryder defended the joke, citing the controversy as “crazy”.