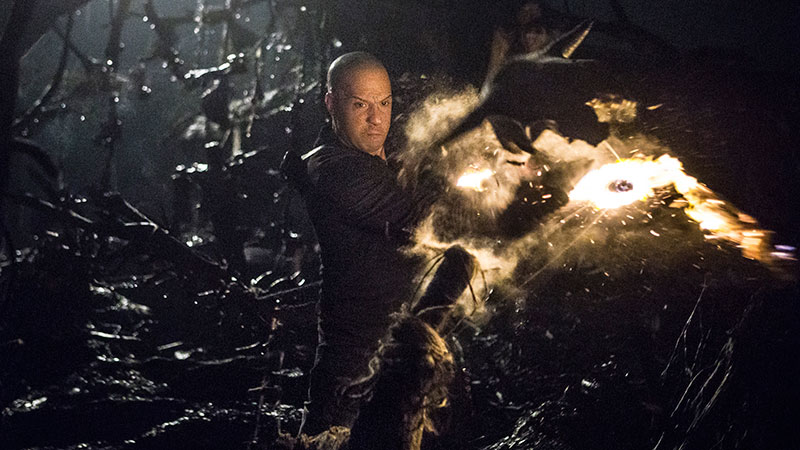 The Last Witch Hunter propels audiences into a complex mythological universe packed with intense battles, unthinkable treachery and unforgettable characters. Set in a world never before seen on screen, the story spans over 800 years of one man’s quest to keep an army of vicious supernatural creatures determined to wipe out humanity at bay. 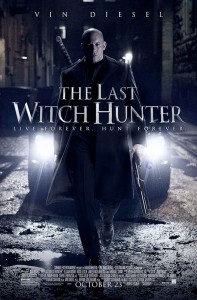 The Witch Queen’s costume and makeup design, as well as her home, take inspiration from the late Polish painter, photographer and sculptor, Zdzisław Beksiński, whose work incorporates abstracted biomorphic shapes in a style known as dystopian surrealism.

Global action hero Vin Diesel produces and stars as Kaulder, the centuries-old guardian of the human world who has lost his family, friends and perhaps even his hope in the battle against the dark forces. The inspiration for Kaulder and his story came from Diesel’s days as an avid gamer—particularly his more than 20-year fascination with the popular fantasy role-playing game Dungeons and Dragons. “The idea of doing an action-fantasy film was always appealing to me. I met with screenwriter Cory Goodman five years ago and we geeked out about Dungeons & Dragons and next thing you know, I get this amazing script about a witch hunter.”

Goodman brought the project to Summit Entertainment and producers Mark Canton and Bernie Goldmann, who recognized its potential as a vehicle for Diesel. Together the producers chose director Breck Eisner to take the helm. “I’ve known Breck for a long time,” says Canton. “He is relentless. His work ethic is incredible, and his talent is prodigious. His imagination and attention to detail brought the story alive.”

To keep track of the complex action and backstory, multiple levels of reality and a time span of over 800 years, Eisner worked with a group of talented artists to create extensive storyboards that documented the entire movie virtually frame by frame. “With a film like this you need a director who pays attention to every detail,” adds Diesel.

As the film opens, Dolan 36th is retiring. “Kaulder has a special bond with this Dolan,” says Canton. Despite his personal relationship with Diesel, Michael Caine was taken aback when he was approached for the role. Caine’s character is passing the Dolan’s mantle on to a young priest played by Elijah Wood. “The script surprised me,” says Wood. Kaulder finds an unexpected new ally in his quest when he meets Chloe, a modern-day witch who runs a Memory Bar, a bohemian paradise hidden behind a magic door. “It’s a new take on what happens at a bar,” says Rose Leslie, who plays Chloe. Belial is played by Icelandic actor Ólafur Darri Ólafsson, “Belial is a warlock who has been working to bring the Witch Queen back for many years,” explains Ólafsson.

The Last Witch Hunter was shot from early August to early December in 2014 on location in Pittsburgh, which stood in for New York City. Production designer Julie Berghoff built on Eisner’s comprehensive storyboards and notes to create the eerie environs of the Hexan, as well as the rest of Kaulder’s foreboding world. “It was the most visual script I have ever read,” Berghoff says.

Transforming glamorous Julie Engelbrecht into the terrifying Witch Queen character was a time consuming and exacting process. “We wanted to allow her beauty to shine through,” explains makeup designer Justin Raleigh. “I think we came up with something very successful. It’s about a four hour application with the help of three make-up artists.”

The Witch’s Tree set was constructed on a soundstage and was designed to withstand both fire and water. “A lot of thought went into every detail,” says the production designer. “Part of the floor was constructed to look like roots. We also constructed soft branches to make sure no one got their eyes poked out, as well as waterproof and fireproof branches.”

The creation of the Sentinel, a fifteen-foot guardian of the witch prison, was one of Chesney’s biggest challenges. Sculpted out of wood, bone and hide over a metal core, the Sentinel was mounted on a section of roller-coaster track to make it mobile. A cart holding a piece of green screen was integrated into the sequences as well.