Sucker Punch is an American action-fantasy film written by Steve Shibuya and Zack Snyder, and directed by Snyder. Sucker Punch features an ensemble female cast that includes Emily Browning, Abbie Cornish, Jena Malone, Vanessa Hudgens and Jamie Chung. The film follows a young girl in the 1950s about to be lobotomized as she attempts to escape an asylum with her inmate friends. 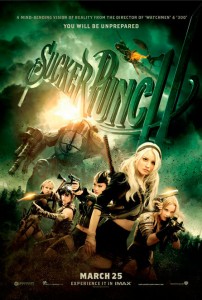 In Sucker Punch, a young girl is institutionalized by her wicked stepfather. Retreating to an alternative reality as a coping strategy, she envisions a plan which will help her escape from the facility.

Development began in March 2007. The script, which was penned by Snyder and Shibuya, was finalized in five years and was actually planned to be made first before Watchmen. For Sucker Punch, Snyder gathered most of the Vancouver-based production team who worked on Watchmen. Pre-production took place in Los Angeles in June 2009, then moved to Vancouver in July. Principal photography began in September 2009 and concluded in January 2010; filming took place in Vancouver.

Set In The 1950’s into the vivid imagination of a young girl placed at a mental institution by her step-father some time after her mother died, with only her dreams providing the ultimate escape from her darker reality. Unrestrained by the boundaries of time and place, she is free to go where her mind takes her, and her incredible adventures blur the lines between what’s real and what is imaginary.

She has been locked away against her will, but Babydoll (Emily Browning) has not lost her will to survive. Determined to fight for her freedom, she urges four other young girls-the outspoken Rocket (Jena Malone), the street-smart Blondie (Vanessa Hudgens), the fiercely loyal Amber (Jamie Chung) and the reluctant Sweet Pea (Abbie Cornish)-to band together and try to escape their terrible fate at the hands of their captors, Blue (Oscar Isaac), Madam Gorski (Carla Gugino) and the High Roller (Jon Hamm).

Led by Babydoll, the girls engage in fantastical warfare against everything from samurais to serpents, with a virtual arsenal at their disposal. Together, they must decide what they are willing to sacrifice in order to stay alive. But with the help of a Wise Man (Scott Glenn), their unbelievable journey-if they succeed-will set them free.

Sucker Punch first gained attention in March 2007. Snyder put the project aside to work on Watchmen first. The film is co-written with Steve Shibuya, who is the author of the original score that the story is based on. Snyder will also direct and produce with his wife and producing partner, Deborah Snyder, through their Cruel and Unusual Films banner. Wesley Coller is executive producing.

Music becomes the backbone of the film. They used actual songs for Sucker Punch that would create suitable moods. It plays an important factor in the film and will be used as it was in Moulin Rouge!, as Snyder says. Dance choreography was spearheaded by Paul Becker, with Jeff Dimitriou as associate. Carla Gugino, who plays a “madam” in the brothel, had to take singing lessons for scenes wherein she plays a choreographer madam in the brothel. The brothel scenario will have “sexy” songs, as Jamie Chung describes, and dance fantasy scenes. As of September 2009, Chung remarked that they already began recording tracks for Sucker Punch. Oscar Isaac reveals that the songs used in the film aren’t going to be original but they are going to be new arrangements of existing music.

With an $85 million budget, production took place in September 2009 and was expected to last until January 2010 in Vancouver and Toronto. Originally, production would have started on June 2009, but it was postponed. Production concluded on January 22, 2010. Snyder confirms that prior to the set production date, he already shot some fantasy sequences for Sucker Punch. Snyder shares that the film is a “stylized motion picture about action and sort of landscapes of the imagination and things of that nature.” Snyder has been decided on the film’s title for some time and says it concerns a pop-culture reference. “It’s about hopefully what the movie feels like when you watch it, more than a specific ‘Oh, it’s a story of this person.’ It’s all stylized.”

Rick Carter is production designer while the visual effects of the film were done by Animal Logic with 75 visual effects specialists, and the Moving Picture Company (MPC) who were awarded over 120 shots. Sucker Punch operates on three levels—a reality, then a sub-reality where the psych ward world shifts into a strange high-roller’s brothel. The final level is made up of a dream world where more action sequences that are removed from time and space take place. Warner Bros. announced earlier that Sucker Punch will be released in 3D format. Zack Snyder describes the conversion into 3D as a completely different process. However, it was recently announced that the film will not be presented in 3D.

Snyder wanted to design the movie to where there’s no limits on him at all, considering that he had co-written the script and this is his first original film not based on any earlier references, and says it is the most difficult part. He adds that he still wants it to “be a cool story and not just like a video game where you’re just loose and going nuts.” Sucker Punch is into a mix of real and digital, with the night club built next door to the First World War trenches, a castle’s partial facade — dragons to be added later — and the grim asylum hallways.