Legend of the Guardians: The Owls of Ga’Hoole is an 2010  computer-animated family film based on the book series Guardians of Ga’Hoole by Kathryn Lasky. Zack Snyder is directing the film, and Jim Sturgess, Geoffrey Rush, Ryan Kwanten, Emily Barclay, Anthony LaPaglia and David Wenham voice the characters. Production took place in Australia, and the film is scheduled to be released on September, 24, 2010. 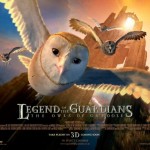 Warner Bros. Interactive Entertainment plans to release a game based on Legend of the Guardians movie for the Wii, Xbox 360, PS3, and DS platforms.

Warner Bros. acquired film rights to the book series Guardians of Ga’Hoole by Kathryn Lasky in June 2005. The studio planned to produce the series as a computer-generated animated film under producer Donald De Line with Lasky writing the adapted screenplay. In April 2008, the project was under Village Roadshow with Zack Snyder attached to direct and Zareh Nalbandian producing.

A new screenplay was written by John Orloff and John Collee. Production began in Australia in February 2009. The film will be developed by the digital visual effects company Animal Logic, following its success with the 2006 film Happy Feet.

The film was developed and produced for more than 3 years at Animal Logic’s studios in Sydney, Australia. A team of 500+ artists, technicians, and support staff were amassed to design and develop the film. The film was conceived in 3D stereoscopic from the get-go.

Animal Logic’s team of artists designed, created, and animated 15 unique species of owls, as well as other forest creatures such as snakes, crows, bats, centipedes, bees, beetles, bugs, moths, a hermit crab, a Tasmanian Devil, and an echidna.

The end credits sequence shows the adventures of Soren, Gylfie, Digger and Twililght as told by the young owls as if they were putting on a shadow play performance in the Great Tree. It was this childlike quality that guided the animation and the interpretation of the story in the credits.

The credit sequence was conceived by Felicity Coonan, and was designed and executed over 3 months at Animal Logic’s Sydney studios. A small team of artists who had each been intricately involved in the production of the film were amassed to execute the sequence.