Yogi Bear is an 3-D live-action/CGI film adaptation of the iconic Hanna-Barbera cartoon series, The Yogi Bear Show, due for release on December 17, 2010. It will be distributed by Warner Bros. with Hanna-Barbera Productions. It will be the first movie development of a Hanna-Barbera property produced without the assistance of Bill Hanna and Joe Barbera, who died in 2001 and 2006 respectively. 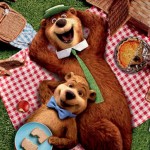 Rhythm and Hues is confirmed to be providing CGI character animation for Yogi Bear, Boo-Boo, and Cindy Bear in the film. The company had previously worked with Hanna-Barbera on past theatrical productions: The Flintstones, The Flintstones in Viva Rock Vegas, Scooby-Doo and Scooby-Doo 2: Monsters Unleashed.

Eric Brevig is the director, and Donald De Line, Karen Rosenfelt and Tim Coddington are the producers, with Lee Berger, Jim Dyer, Andrew Hass and Jon Berg as the executive producers. Dan Aykroyd stars in the film as Yogi Bear. Principal photography began in November, 2009. Preceding the film will be a new 3D short with Wile E. Coyote and Road Runner titled “Rabid Rider”.

On October 2, 2008, it was confirmed that a live-action/CGI Yogi Bear movie was in the works. It is currently in production and has recently obtained the release date of December 17, 2010. It will be distributed and financed by Warner Bros., with Hanna-Barbera Productions. It will be the first movie development of a Hanna-Barbera property not produced with the assistance of William Hanna or Joseph Barbera. Ash Brannon was originally scheduled to direct the film but was replaced by Eric Brevig (Journey to the Center of the Earth 3-D) when it was decided that the film would be produced as a 3-D project. Donald De Line is the producer and Karen Rosenfelt is the executive producer along with Jon Berg as a secondary executive producer for Warner Bros.

Joshua Sternin and Jeffrey Ventimilia wrote the script. The film, adapting the television series, will follow the adventures of Yogi Bear and his pal Boo-Boo in Jellystone Park, as they avoid Ranger Smith who is trying to stop Yogi from stealing pic-a-nic baskets. Dan Aykroyd will voice Yogi, Justin Timberlake will voice his pal, Boo Boo, and Christine Taylor will voice his girlfriend, Cindy Bear. Anna Faris plays a nature-documentary film-maker following the escapades of Yogi in Jellystone Park. Tom Cavanagh will be playing the part of Ranger Smith.