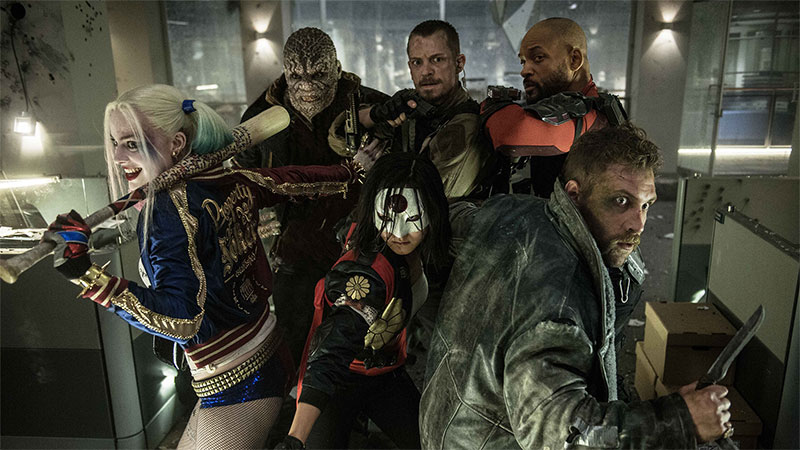 It feels good to be bad… Assemble a team of the world’s most dangerous, incarcerated Super-Villains, provide them with the most powerful arsenal at the government’s disposal, and send them off on a mission to defeat an enigmatic, insuperable entity. U.S. intelligence officer Amanda Waller has determined only a secretly convened group of disparate, despicable individuals with next to nothing to lose will do. However, once they realize they weren’t picked to succeed but chosen for their patent culpability when they inevitably fail, will the Suicide Squad resolve to die trying, or decide it’s every man for himself? 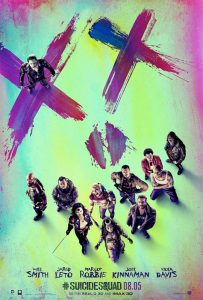 While his character might be out for himself, Will Smith was eager to foster a great sense of camaraderie with his fellow actors. To that end, he had a small library built on set, as well as a games room where people could play pool or ping pong. If the atmosphere on set came to reflect the intensity of the scenes they were shooting, Smith would break into song, easing the stress.

“The Suicide Squad is essentially a team—though a wholly reluctant one—of DC’s Super-Villains,” explains writer/director David Ayer. “Because who better to defeat one Super-Villain than another or, in this case, a whole gang of Super-Villains?”

“If you look at the films David Ayer has made to date,” notes producer Richard Suckle, “his characters always live by the beat of their own drum. The Squad follows a similar construct, with characters who don’t want to be told what to do or how to do it, who buck the system. They want to play by their own rules, but they’re forced to play together.”

Producer Charles Roven, a veteran of the genre, offers, “I felt it was really interesting to make a film with the DC bad guys, to see which of them are truly evil and which might have some redeeming factors.”

Will Smith leads the ensemble as master marksman Deadshot. “I have always loved the superhero genre, and David wanted to make a truly fun film that put a powerful story into the package, which looked at the difference between being bad and being evil.”

Viola Davis, who stars as Amanda Waller, recalls her initial discussion with Ayer. “Our first encounter was at his house,” she says. “I went for a meeting, and we just clicked. That happens maybe a few times in your career, where someone just gets you. They just see you and allow you to be you. That was David.”

Ayer’s name and reputation were enough to intrigue Margot Robbie. “‘Suicide Squad’—I didn’t know what that was, I hadn’t read comics growing up and I was ignorant to that whole universe. But David was the writer and director and I knew I’d kill to work with him. ‘Training Day’ is epic. I saw ‘End of Watch’ four times. ‘Fury’ was amazing. We had maybe a 20-minute Skype call where he explained a very loose concept to me, and I was in.”

Though as Colonel Rick Flag he wasn’t to play a “villain”—quite the opposite, in fact—Joel Kinnaman was equally attracted to the concept and Ayer’s vision for it. Like Robbie, the actor was previously unfamiliar with the characters and their world.

In addition to the varied characters who make up the Squad, Ayer wanted to include one of comics’ darkest deviants in the film: the Joker. To take on the mantle of perhaps the most iconic criminal in DC’s canon, the filmmakers turned to Jared Leto to depict an entirely new version of the psychopathic clown who’s always the only one in on the joke. Leto admits the notion was daunting at first. “I remember when I got the call, I had this simultaneous feeling of excitement and dread. As soon as I heard the word Joker I knew that I was going to have to dive really deep and go to a place I had never gone before. He’s been interpreted so beautifully, they should almost put a cap on the well and just call it. But then there was the other side: what else could I uncover? What could I do that hadn’t been done?”

One Squad member who can never really escape who he is, is Killer Croc, a genetic mutation who once harbored designs of taking control of Gotham before finding himself in Belle Reve. Adewale Akinnuoye-Agbaje plays the cannibalistic beast who, like some of his fellow Squad members, didn’t start out life as a criminal.

To bring to life what many fans have become familiar with on the pages of the comics, Ayer turned to costume designer Kate Hawley and hair and makeup designer Alessandro Bertolazzi to create the outrageous looks for “Suicide Squad.” Rather than look too much to the past, the designers focused on their first directive from Ayer: no superhero costumes, no men in tights. Instead, the twin themes of gangsters and the military were to inform the characters’ looks. “David uses the phrase ‘chasing the real’ a lot,” says Hawley, “meaning, how do we find that character in the reality of our world and then heighten it?’”

The filmmakers, however, still wished to pay homage to the artwork of Harley’s creators. “There were moments that we literally took from the pages of the comics,” Hawley reveals. Remaining on track with Ayer’s desire to keep things real, the character of Killer Croc was built the old-fashioned way, instead of in a computer. “I’m a believer in the old-school ways of filmmaking,” says the director, “so Killer Croc is a makeup effects character with an actor inside.” To achieve Ayer’s desire, Akinnuoye-Agbaje spent months enduring moldings and fittings from the film’s team of prosthetic artists. In the end, his physical training became an absolute necessity: five hours in makeup followed by up to 13-hour days wearing two inches of foam, facial prosthetics, a hoodie, and a thick crocodile leopard jacket that weighed about 40 pounds and which soaked up another ten pounds of water during shoots in the rain.

Principal photography on “Suicide Squad” was accomplished primarily at Pinewood Toronto Studios in Canada. Ayer reunited with director of photography Roman Vasyanov; the two had worked together twice before and developed a shorthand, which served them well as the film required several highly complicated shots and was on a rigorous schedule.

Scholl began with numerous sketches to obtain the balance of realism and heightened reality that Ayer wanted. One of the first sets he constructed was the Belle Reve Federal Penitentiary, which, according to Scholl, was one of the most “real world” sets.

Setting up for a car chase sequence off-lot, the filmmakers tried to shoot the pursuit of Joker’s car by the Batmobile along ten and a half blocks of Yonge Street, Toronto’s main artery. Intended to be filmed over three nights, the scene required a street closure between 8:00 p.m. and 5:00 a.m., which the city granted. But in the age of social media, keeping the filming under wraps was impossible, and on the first night a few thousand fans lined the streets. On the second night, however, there were over 30,000 people, shoulder to shoulder on the sidewalk for more than a mile. While it was no longer deemed safe to accomplish their stunts, rather than pack it in, the producers thought, “All these people have come out to see the Batmobile, let’s give them the Batmobile.” So they drove it slowly down the street, letting people take photos. Once the fans were happy, they departed, allowing filming to safely resume.

Writer/director David Ayer notes, “We shot on film with an anamorphic lens—very traditional, beautiful filmmaking—so people who appreciate film as art are going to have an incredible print to look at. The sets, the costumes, the props…everything is very designed but in a grounded, honest way. I think there’s going to be a lot of intrigue simply in how we executed this film.”