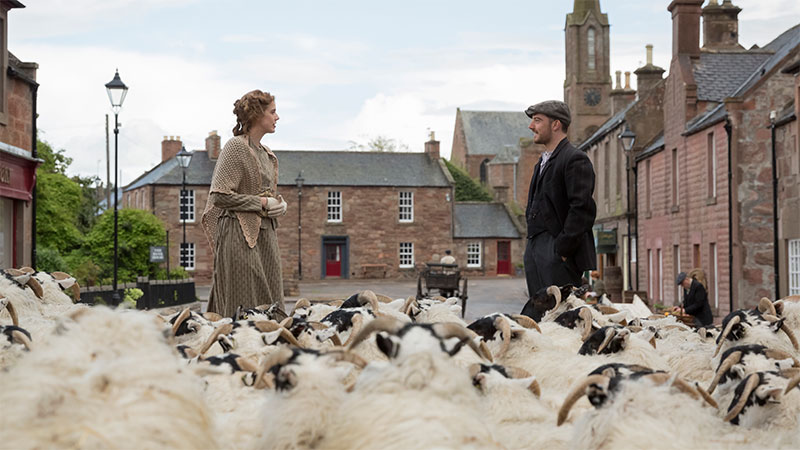 Set in a rural community, Sunset Song is driven by the young heroine Chris and her intense passion for life, for the unsettling Ewan and for the unforgiving land. The First World War reaches out from afar, bringing the modern world to bear on the community in the harshest possible way, yet in a final moment of grace, Chris endures, now a woman of remarkable strength who is able to draw from the ancient land in looking to the future. 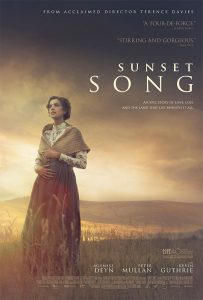 Sunset Song is Terence Davies’ intimate epic of hope, tragedy and love at the dawning of the Great War.

It is thirty years ago now. When the Sunday night serial on BBC1 went out in ancient Black & White. “Sunset Song” by Lewis Grassic Gibbon was one of them and its grandeur has stayed with me. It is a dark and brooding novel about the Scottish peasantry, about the land in  general and one family – The Guthries – in particular. They are subsistence farmers extracting a meager living from the earth.

It is a novel about the power and cruelty of both family and Nature, about the enduring presence of the land and the courage of the human spirit in the face of hardship.  Against this background – but of equal stature – is the story of the daughter of the family,

Chris Guthrie and her evolution from schoolgirl to wife to mother to widow then finally becoming a symbol for Scotland itself. The novel is both symbolic and rhapsodic. It is a work of epic intimacy set before, during and after The Great War.

Yet it is delicate.

A filigree of the music of the seasons together with the more modest music of pipes and accordion, played at weddings with the Scottish voices singing the melancholy airs of the old times – “THE FLOWERS OF THE FOREST” and “AULD ROBIN”; songs to pull the heartstrings, to make you remember the long-dead, making you wish for the longed-for happiness which we all need – content and secure in the knowledge that we will never die…for we are young and in our prime.

But time is cruel and so is the land which gives life its harsh beauty, as well as its moments of epiphany beside the lamp or in the firelight at gloaming. The song is yours and mine, of all who feel and have suffered or been happy.  It is the song heard with quiet courage in the face of death.  Or life.

But Chris has a deeper insight, an innate wisdom.  Chris sings the Song of the Earth for humanity, a rhapsody for us all as she charts the eternal cycle of birth, marriage and death.  As the song explores the timeless mysteries of land, home and family – this last one being the greatest mystery of all.  For the family contains all our greatest ecstasies and all our cherished terrors.

The book is suffused with a lyrical melancholy, a quiet threnody for the mystery of life…for life is a mystery contained within an enigma.

How can we bear time or subdue nature?

We can only endure.

At the end of the work a remembrance parade and service is held in an attempt to heal all suffering. At the end of this great work time and the land endure beyond war, beyond human suffering even beyond life itself.

It is a story which deserves to be told.