Tangled (previously known as Rapunzel) is an  American 3D animated film produced by Walt Disney Animation Studios and starring the voices of Mandy Moore and Zachary Levi. It will be the 50th animated feature in the Walt Disney Animated Classics series, planned for release on November 24, 2010. The story is loosely based on the classic German fairy tale Rapunzel by the Brothers Grimm. 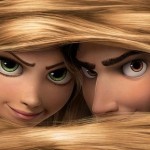 Disney expressed the belief that the film’s emphasis on princesses may have deterred young boys from seeing the film. In order to market the film to both boys and girls, Disney changed the film’s name from Rapunzel to Tangled

The film was made in CGI although Tangled was modeled on the traditional look of oil paintings on canvas. The Rococo paintings of French artist Jean-Honore Fragonard, particularly The Swing, were used as references for the film’s artistic style, a style described by Keane as “romantic and lush.” Keane said, “There’s no photoreal hair. I want luscious hair, and we are inventing new ways of doing that. I want to bring the warmth and intuitive feel of hand-drawn to CGI.”

One of the main goals of the animators was to create movement that mimicked the soft fluidity of the hand-drawn art found in older Disney animated classics. Keane credited Disney 3D animator Kyle Strawitz with helping to combine CGI with the traditional hand-drawn style. “He took the house from Snow White and built it and painted it so that it looked like a flat painting that suddenly started to move, and it had dimension and kept all of the soft, round curves of the brushstrokes of watercolor.

Kyle helped us get that Fragonard look of that girl on the swing… We are using subsurface scattering and global illumination and all of the latest techniques to pull off convincing human characters and rich environments.“