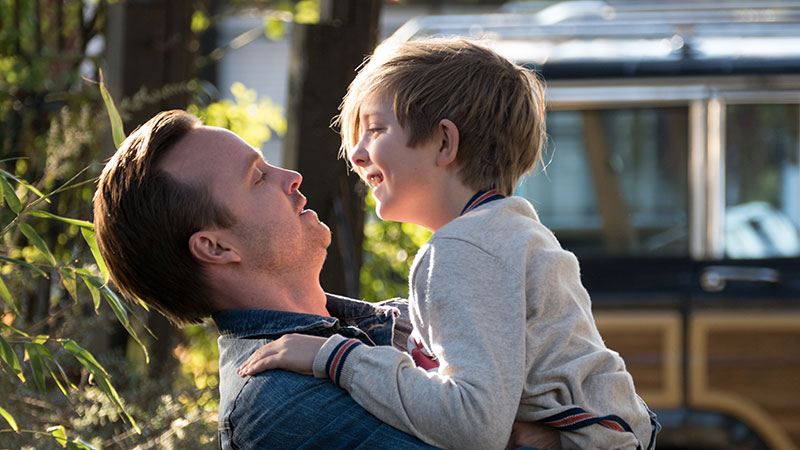 After surviving eight near-death accidents throughout his unlucky life, Louis Drax (Aiden Longworth) plunges off a steep cliff on his ninth birthday. While police investigate the cause of Louis’ near-fatal fall and the whereabouts of his violent father Peter (Aaron Paul), acclaimed neurologist Dr. Allan Pascal (Jamie Dornan) uses unorthodox techniques to try to tap into the boy’s unconscious mind and reveal the truth about the events that led to his condition. 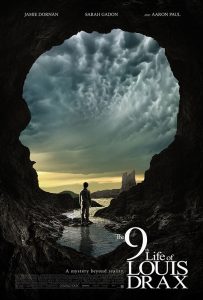 According to author Liz Jensen, the The 9th Life of Louis Drax book was inspired in part by an unsolved mystery in her own family, the death of her maternal grandmother, who fell off a cliff in Switzerland while searching for her lost son.

When best-selling author Liz Jensen completed her fifth novel, The 9th Life of Louis Drax, she was certain the book — a thriller centered around a boy in a coma — would never be made into a movie. Fortunately, one of her agents saw the story’s filmic potential, as did Oscar®-winning director Anthony Minghella (Best Director, The English Patient, 1996), who optioned it with his producing partner, Oscar® winner Sydney Pollack (Best Picture, Out of Africa, 1985). Minghella died in 2008, before he had a chance to make the film.

The novel had such a powerful impact on Max Minghella that he started writing an adaptation almost as soon as he finished reading it. “The universe and imagery that Liz created were so instantly cinematic to me,” he says. “I could also immediately identify ways to make it personal, which I think is an important piece of the puzzle when you’re adapting material. You want to feel there is something you can contribute. Something that is unique to you.” Jensen says she was thrilled when she read Minghella’s screenplay of her book.

In 2013, when Minghella was cast opposite Daniel Radcliffe in the Alexandre Aja-directed fantasy thriller Horns, he took the opportunity to see if Aja might be a good fit for The 9th Life of Louis Drax. Aja remembers their conversation well. “Max mentioned a story he was working on and I was intrigued because on many levels it was something I was looking for at the time — a mystery, a psychological thriller — that incorporated themes of childhood and the secrets that the human mind can hide.” When he read the script, Aja says he found it at once original and touching.

When it came to assembling the cast of The 9th Life of Louis Drax, the filmmakers knew that finding a young actor to play the title role, the 9-year-old at the center of the story, would be the biggest challenge.

The filmmakers embarked on a long and exhaustive search to find a young actor who could convey Louis’ precocious brilliance as well as the vulnerability beneath his prickly exterior. Vancouver-born Aiden Longworth was one of the first to audition and although more than 100 other boys from throughout North America and England were considered over the ensuing months, the filmmakers were drawn back to Aiden by his acting skill as well as his openness, cheery disposition and keen interest in science and technology.

The complex character of Dr. Allan Pascal serves as the audience’s eyes and ears. To portray the renowned and passionate doctor, the filmmakers turned to Jamie Dornan, best known for his mesmerizing performances as a serial killer in the hit BBC television series “The Fall”and more recently, as Christian Grey, a tormented business magnate in the box office-smash Fifty Shades of Grey.  Dornan says it was the exceptional quality of the writing and the complexity of Pascal’s character that persuaded him to take on the role. “Max has written such a brilliant, genre-bending script,” he says.

Equally crucial was the casting of Natalie, a brittle woman who has endured Louis’ multiple near-death experiences and a marriage to a violent drinker. “We needed an actress who could convincingly portray both an innocent and a seductress, and effortlessly transition between the two,” explains Bricknell.  Canadian actress Sarah Gadon was the filmmakers’ hands-down favorite for the role, both because of her chameleon-like quality as an actor and her delicate beauty.

Playing Gadon’s husband and Louis’ stepfather, Peter Drax, is Aaron Paul, best known for his Emmy®-winning performance as Jesse Pinkman in AMC’s “Breaking Bad.”Paul says he found himself engrossed by the mysterious story from page one of Minghella’s screenplay.

Another essential yet elusive character in the story is the amorphous black sea monster that slithers through Louis’ unconscious mind as he lays in a coma. The look of the monster was a collaboration between the filmmakers and KNBEFX Group, which specializes in character prosthetics, animatronics and creatures creation. “The concept of the monster is the sea come to life,” explains makeup effects supervisor Michael McCarty. “It’s like a living reef, so it’s covered in barnacles and other coral life with seaweed draped all over it. It’s inspired by Louis’ favorite book in the film, The Living Sea, by Jacques Cousteau.” Made primarily from foam latex, urethane and rubber, the suit weighs about 40 pounds, and twice that when wet, making it a significant physical challenge for the man wearing it.

Although Jensen set her novel in France, screenwriter and producer Max Minghella chose to set the film adaptation closer to home in San Francisco. Director Alexandre Aja wanted the film to have a timeless feeling, says production designer Rachel O’Toole. “He didn’t want it to feel overly contemporary or overly retro. He definitely likes a lot of layering and a lot of texture. And he’s not afraid of color or richness. He provided a lot of input, which is great, but he also gave me a lot of freedom.”

The 9th Life of Louis Drax marks cinematographer Maxime Alexandre’s ninth collaboration with Aja. “I am extremely thankful to work with someone who believes 100 percent in what I am doing and gives me the freedom to share unconventional ideas,” says the director of photography, whose numerous credits also include P2 and The Crazies.

Principal photography on The 9th Life of Louis Drax took place for 36 days in and around Vancouver, primarily on location. One of the primary filming venues was Riverview Hospital, a century-old mental-health facility that closed most of its operations in 2012 and now sits largely empty. At its peak in the 1950s, it housed approximately 5,000 patients and a number of ghostly sightings have been reported among its historic buildings and park-like surroundings. The hospital was used to shoot scenes including the National Hospital’s surgery rooms, morgue, emergency room, incubation room, waiting room and corridors, as well as the psychiatric hospital, Dr. Perez’s office and even the police station.