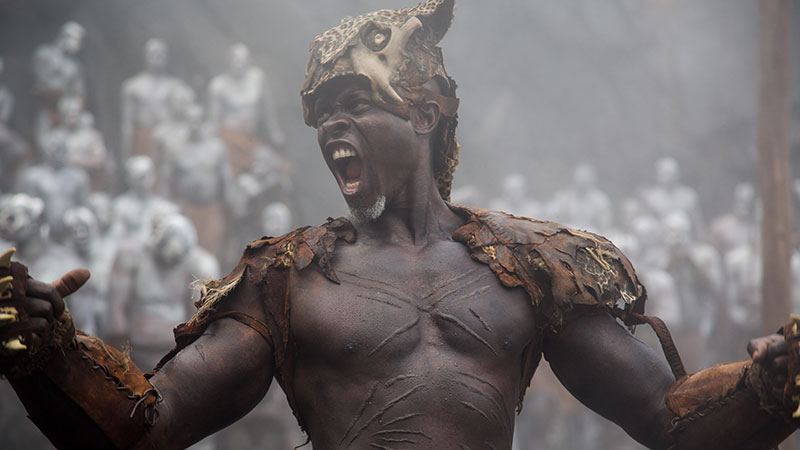 It has been years since the man once known as Tarzan (Alexander Skarsgård) left the jungles of Africa behind for a gentrified life as John Clayton, Lord Greystoke, with his beloved wife, Jane (Margot Robbie), at his side. Now, he has been invited back to the Congo to serve as a trade emissary of Parliament, unaware that he is a pawn in a deadly convergence of greed and revenge, masterminded by the King of Belgium’s envoy, Leon Rom (Christoph Waltz). But those behind the murderous plot have no idea what they are about to unleash. 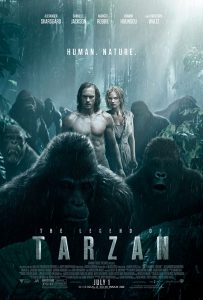 “The Legend of Tarzan” was shot at Warner Bros. Studios, Leavesden, with additional photography being accomplished in the African country of Gabon and in the Dolomites of Italy, as well as on location around the UK.

Following his work on the final four “Harry Potter” films, director David Yates says he was hoping to find another project “that was epic and filled with action and spectacle, and then along came this script. It immediately grabbed me; it was a very fresh take on this iconic figure.”

Alexander Skarsgård, who takes on the film’s title role, agrees. “I was really blown away by the script. ” In preparation for his role, Skarsgård immersed himself in an intense training regimen, which physical trainer Magnus Lydgback says was tailored to his character. “We started with heavy lifting and cardio and had a mobile gym on set. But if you’re playing someone like Tarzan, who needs to be more shredded and move through the jungle like a panther, you can’t stick to the gym all the time. So we switched it up with swimming, running, boxing and different types of martial arts.”

Margot Robbie, who stars as Jane, appreciated the film’s more contemporary approach to the couple. “It’s set in the 1800s, but it has a very modern feel to it, with universal themes that are applicable no matter what day and age it is,” she says. “Speaking in Lingala was by far the most difficult thing for me,” Robbie reveals. “There was one scene where Jane has a lot of dialogue in Lingala, and there was one line I just couldn’t get down. After a few attempts, it just became funny and everyone was cracking up, which didn’t make it any easier. It was hilarious.”

Samuel L. Jackson portrays an American named George Washington Williams. The actor shares, “George needs Tarzan to go to the Congo so he can go with him. He needs to find proof that what he suspects is true: despite all claims to the contrary, there is slavery going on.” Interestingly, Jackson had recently discovered that his own ancestry has ties in Gabon, which, he says, “gave me a better place to start emotionally and, artistically, to understand who the character is. George Washington Williams was, in actuality, one of the first African Americans to go to the Congo after King Leopold claimed it as his own. Because of the time he was born, he was maybe one generation away from being someone who could have been captured and sent into slavery. In the film, it’s obviously something that touches his heart, and that gave me an opportunity to understand him on a personal level.”

The bargain Leon Rom strikes is with an old enemy of Tarzan’s: Mbonga, the Chief of the Mbolonga tribe, the guardians of the Opar region, which is rich in minerals…including diamonds. Cast in the role, Djimon Hounsou notes, “Mbonga knows the wealth his country has but perhaps doesn’t understand that it can also be a serious liability in the wrong hands. ” A native of Africa, Hounsou goes on to reflect, “I have always loved the beauty of Africa, but unfortunately, it is a continent that was voiceless and still is in many respects. So although the story is entirely fictional, some of its themes are still relevant in an organic way.”

The screenplay for “The Legend of Tarzan” was written by Adam Cozad and Craig Brewer from their own story. Cozad reveals, “One thing that was very important to me, and also spoke to David Yates, was the sweeping romance between John, or Tarzan, and Jane.”

“I was a huge fan of the books,” Brewer recalls, “so I felt it was crucial to include certain characters and settings from Burroughs’ classic tales, and, of course, that begins with Tarzan and Jane. But we wanted to ground the story in historical events surrounding King Leopold’s occupation of the Congo, so it was interesting to involve them with people connected to that time and place.”

Producer David Barron remarks that the film takes the character beyond what audiences might expect. “Tarzan is one of the original action heroes, but this movie is going to surprise people who think they know the story. He grew up in the jungle, raised by apes, so his powers are his incredible strength and his senses, which are all magnified.”

The film reunited Yates and Barron with several of their “Harry Potter” associates, including production designer Stuart Craig, editor Mark Day, and visual effects supervisor Tim Burke. The creative team also included director of photography Henry Braham, costume designer Ruth Myers and composer Rupert Gregson-Williams. It would take all their skill and experience, as well as a close collaboration between their departments, to complete the film.

Production on “The Legend of Tarzan” involved an extraordinary fusion of brilliant design, groundbreaking aerial photography and state-of-the-art visual effects, all merging to present the spectacular landscapes and wild inhabitants of Africa, while shooting almost entirely on the stages and backlot of Leavesden in England. And though the human characters interact with a variety of African species, no real animals were used in the making of the film. All of the creatures—from gorillas to lions to elephants and more—were entirely brought to life, in stunningly realistic form, through cutting-edge CGI.

During pre-production, Josh Ponte, who spent the last 15 years striving to preserve the wildlife and natural resources of the African nation of Gabon, had arranged for a military helicopter to show David Yates the splendor of the country’s lush forests, cliffs, rivers and waterfalls. The director spent four days marveling at the beauty of the terrain unfolding beneath him and knew he had found his setting. Those remote landscapes—ultimately captured in a six-week location shoot following filming at Leavesden—provided the wealth of geographically diverse backdrops that seamlessly melded with Stuart Craig’s sets.

After guiding that first scouting trip to Gabon, Ponte went on to serve as the project’s African technical advisor, becoming an invaluable consultant for virtually every department.