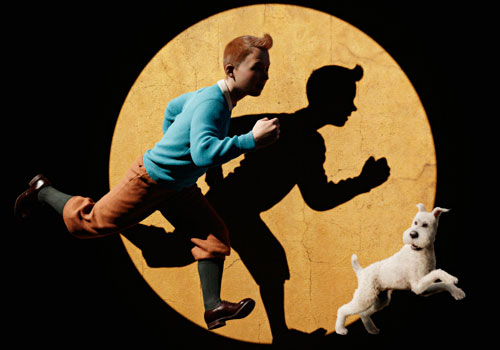 The Adventures of Tintin: Secret of the Unicorn is a 2011 American motion capture 3D film based on The Adventures of Tintin, a series of comic books created by Belgian artist Georges “Hergé” Remi. It is directed by Steven Spielberg, produced by Peter Jackson, and written by Steven Moffat, Edgar Wright and Joe Cornish. The script is based on three of the stories: The Crab with the Golden Claws, The Secret of the Unicorn and Red Rackham’s Treasure. 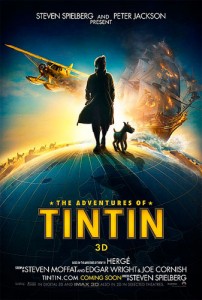 Sony released The Adventures of Tintin: Secret of the Unicorn poster film during late October and early November 2011 in Continental Europe, Eastern Europe, Latin America, and India. Paramount distributed the film in Asia, New Zealand, the UK and all other English speaking territories. They released the film in the United States on December 23, 2011

Steven Spielberg first acquired rights to Tintin after Hergé’s death in 1983, and re-optioned them in 2002. Filming was due to begin in October 2008 for a 2010 release, but release was delayed to 2011 after Universal opted out of producing the film with Paramount, who provided $30 million on pre-production. Sony chose to co-produce the films. The delay resulted in Thomas Sangster, who had been cast as Tintin, departing from the project. Producer Peter Jackson, whose company Weta Digital is providing the computer animation, intends to direct a sequel. Spielberg and Jackson also hope to co-direct a third film.

The Adventures of Tintin will be the first Spielberg film to be shot digitally. Although Spielberg is not completely unfamiliar with digital cinematography, the director has firmly stated that he still prefers working with film.

Spielberg has been an avid fan of The Adventures of Tintin comic books, which he discovered in 1981 when a review compared Raiders of the Lost Ark to Tintin. His secretary bought him French-language editions of each book, but Spielberg did not have to understand them: he immediately fell in love with its art. Meanwhile, the comics’ creator Hergé, who didn’t like the previous live action film versions and the cartoon, became a fan of Spielberg. Michael Farr, author of Tintin: The Complete Companion, recalled Hergé “thought Spielberg was the only person who could ever do Tintin justice”. Steven Spielberg and his production partner Kathleen Kennedy of Amblin Entertainment were scheduled to meet with Hergé in 1983 while filming Indiana Jones and the Temple of Doom in London. Hergé died that week, but his widow decided to give them the rights. A three-year long option to film the comics was finalized in 1984, with Universal as distributor.

Steven Spielberg commissioned E.T. the Extra-Terrestrial writer Melissa Mathison to script a film where Tintin battles ivory hunters in Africa. Spielberg saw Tintin as “Indiana Jones for kids” and wanted Jack Nicholson to play Haddock. Unsatisfied with the script, Spielberg continued with production on Indiana Jones and the Last Crusade. The rights returned to the Hergé Foundation. Claude Berri and Roman Polanski became interested in filming the property, while Warner Bros. negotiated long and hard for the rights, but they could not guarantee the “creative integrity” that the Foundation found in Spielberg. In 2001, Steven Spielberg revealed his interest in depicting Tintin with computer animation. In November 2002, his studio DreamWorks reestablished the option to film the series. Spielberg said he would just produce the film. In 2004, the French magazine Capital reported Spielberg was intending a trilogy based on Secret of the Unicorn / Red Rackham’s Treasure, The Seven Crystal Balls / Prisoners of the Sun and The Blue Lotus / Tintin in Tibet (which are not a single story, but both feature the Chang Chong-Chen character). By then, Spielberg had reverted to his idea of live action adaptation, and called Peter Jackson to ask if Weta Digital would create a computer-generated Snowy.