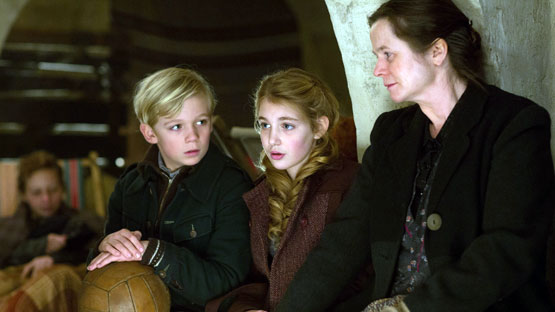 Based on the beloved bestselling novel, The Book Thief tells the inspiring story of a spirited and courageous young girl named Liesel, who transforms the lives of everyone around her when she is sent to live with a foster family in World War II Germany. Markus Zusak’s book and director Brian Percival’s film adaptation tell the story of Liesel, who is sent to live with foster parents, the kind-hearted Hans Hubermann and his prickly wife Rosa. 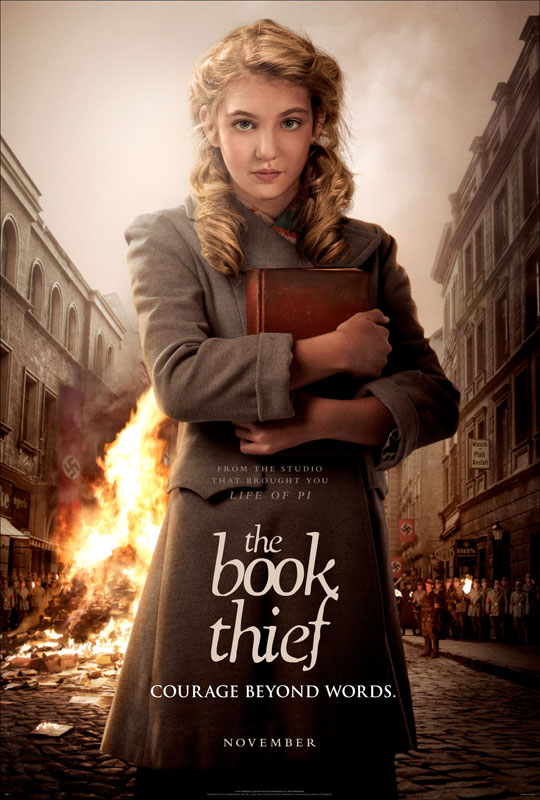 Over three nights, with temperatures plummeting to minus-two degrees Fahrenheit, cast and crew, and 450 extras, wrapped in blankets when the cameras weren’t rolling, worked through the night to capture a dark time in global history with chilling authenticity.

The story and its characters sprang from the imagination of author Markus Zusak whose novel The Book Thief was published in his native Australia in 2005 and throughout the rest of the world in 2006.  The book has sold eight million copies worldwide, held a place on The New York Times best-seller list for almost seven years and has been translated into over 30 languages.

A big step forward in the film’s development was the hiring of screenwriter Michael Petroni to adapt Zusak’s 580-page tome.  When he was approached to write the screenplay, Petroni was already, he says, “a great fan of the novel.” There were several challenges to be met.  Petroni adds: “The book is written out of chronological order, with the narrator often intriguing the reader with tidbits of information that later play back into the story. My first job was to unravel it chronologically and then restructure scenes to have the most dramatic impact for a movie. This meant having to sometimes alter the chronology of the book; I doubt people will notice but these kinds of changes are always tricky to accomplish. I’m honored that Markus trusted me with his book.”

Although the filmmakers had discussed some casting ideas for the roles of Hans and Rosa, they decided to first focus on finding their Liesel.  The casting process began in the UK, and soon spread across Europe, the United States and Australia. All in all it was a pretty tall order for a child actor, who, in addition, would have to be able to age on screen from 11 to 17.

The filmmakers saw almost a thousand candidates for the role. Zusak himself had a casting idea that proved impressively on target.  He had attended a showing of a Canadian motion picture Monsieur Lazhar, which was nominated for an Academy Award® for foreign language film, and its young star won a Genie Award for Best Supporting Actress.  That acclaimed actress was Sophie Nélisse, whose indelible performance earned her many new fans, including the author of The Book Thief. “Sophie’s work in the film was amazing,” says Zusak, “and as I walked out the cinema I thought she’d be great as Liesel. ”

Shooting on The Book Thief began at Studio Babelsberg, in Berlin, Germany.  There, the unit used sound stages, where production designer Simon Elliott crafted the Hubermann’s House on the fictional Himmel Street. When not on the stages, the production filmed on the studio backlot, where Elliott built the exterior of the house, one of several in the neighborhood.  Elliott also revamped Babelsberg’s backlot into the story’s Munich Street.