The Killer Inside Me is a 2010 American film adaptation of the 1952 novel of the same name by Jim Thompson. The film is directed by Michael Winterbottom and stars Casey Affleck, Kate Hudson, and Jessica Alba. 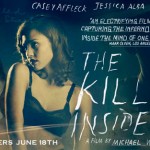 The Killer Inside Me premiered on January 24, 2010 at Sundance Film Festival. In January 2010, IFC Films saved the rights of the film for around $1.5 million and announced the theatrical and VOD platforms release on June 9, 2010. It was nominated for the Golden Bear at the 60th Berlin International Film Festival.

Numerous filmmakers have attempted to adapt Thompson’s novel into a film since the mid-1950s. 20th Century-Fox originally optioned the project as a possible starring vehicle for Marilyn Monroe around 1956, with Monroe starring as Joyce Lakeland. Marlon Brando was attached to star as Lou Ford. Elizabeth Taylor was considered at the time for the role of Amy Stanton. After Monroe’s unexpected death on August 5, 1962, the project was shelved. A film adaption was eventually made in 1976, with Stacy Keach as Lou Ford and Susan Tyrell as Joyce Lakeland.

In the mid-1980s, there was another attempt to adapt the book into a film, with Tom Cruise as Lou Ford, Brooke Shields as Amy Stanton, and Demi Moore as Joyce Lakeland. The project was shelved. In the mid-1990s, after the success of Pulp Fiction, Quentin Tarantino was attached to direct the project. Uma Thurman was set to star as Amy Stanton. Juliette Lewis was considered for the part of Joyce Lakeland and Brad Pitt was attached to star as Lou Ford. This effort fell through after the September 11 attacks, because the film script was too violent.

Tarantino scrapped everything and started from scratch. In 2003 Andrew Dominik wrote a highly stylized screenplay, and was at one point to direct it. He hoped the film would star Leonardo DiCaprio as Lou Ford, Charlize Theron as Amy Stanton and Drew Barrymore as Joyce Lakeland. Dominik lost interest in doing a film adaptation of a 1950s novel and instead chose to film The Assassination of Jesse James by the Coward Robert Ford. Then Marc Rocco stepped in, and wanted to cast Casey Affleck as Lou Ford, Reese Witherspoon as Amy Stanton and Maggie Gyllenhaal as Joyce Lakeland.