Global superstar Jennifer Lopez leads the cast in The Boy Next Door, a psychological thriller directed by industry veteran Rob Cohen that explores a forbidden attraction that goes much too far. In the film, Lopez stars as Claire Peterson, a highschool literature teacher struggling to get back in the dating game after separating from the cheating Garrett, her husband of 18 years. 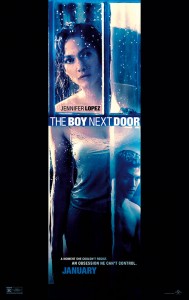 As with the majority of Blumhouse fi lms, The Boy Next Door was fi lmed entirely in and around Los Angeles. Utilizing Balboa High School in Van Nuys as the high school where Claire and Vicky work and
Kevin and Noah attend, and traversing all over, from Silver Lake to Santa Clarita, Los Angeles provided a real-life back drop for the film.

Originally planning to develop the film on a larger scale, producer John Jacobs brought writer Barbara Curry’s The Boy Next Door, which landed on the 2011 Blood List of the industry’s most-liked genre scripts, to Universal Pictures. Curry, a former federal prosecutor, was determined to create a strong and contemporary female protagonist with her inaugural screenplay, and Jacobs felt she did so quite successfully.

It wasn’t until Jacobs met with Jason Blum to discuss the Blumhouse model, at the suggestion of Universal’s co-president of production, Peter Cramer—whom Jacobs credits with shepherding the fi lm—that it was decided that the intimate thriller would fi t perfectly within Blum’s formula. Blum loved the concept and jumped at the opportunity to produce the film. The psychological thriller found its home, and The Boy Next Door was green-lit.

Initially, Lopez had simply signed on to star, but once the team tailored the story line to her sensibilities, the producers took it to Rob Cohen to direct. With Cohen on board and Lopez’s excitement for his vision, she decided she wanted to produce the film alongside Elaine Goldsmith-Thomas under their Nuyorican Productions banner.

Ryan Guzman, who is best known for his roles in the Step Up series, fi rst heard about the role of Noah, the 19-year-old who’s as charming as he is evil, through his manager. Guzman learned that Lopez wanted him to participate in a table read. He laughs: “When I was told that she wanted me to come in, I thought it was a prank. But they assured me it was real, so I read the script. I loved the character because Noah was so dark and completely different from anything I’d ever done.”

After casting Guzman, fi lm makers went on to find the perfect actor to play Claire’s ne’er-do-well husband, Garrett. They got their fi rst-choice actor, one who fit
every criterion: John Corbett. Primetime Emmy and Tony Award-winning actress Kristin Chenoweth joined the production after expressing interest in playing a character who was a departure from many of her previous roles.

In the past, Guzman performed many of his own stunts. So, for this fi lm, the actor was eager to continue the trend. While he did fi lm the majority of the fi ght scenes, there was one particular scene he wanted to do but, for safety reasons, couldn’t. He explains: “This was the fi rst time I didn’t do all my stunts. There was a scene where I get fl ipped into a hole, so my stunt double [SETH DUHAME] did that one.”

For the production design, Cohen brought on Charles Varga to serve as the architect of Claire’s world. Varga shares what enticed him to join the team: “I had worked as the art director on a previous film of Rob’s, and I was excited to be able to work with him again. The script was a lot of fun, we were shooting in Los Angeles, Jennifer Lopez was involved…I couldn’t have asked for anything better.”