Nobby has everything a man from Grimsby could want – 9 children and a girlfriend he loves more than anything (Rebel Wilson). There’s only one thing missing in his life: his little brother, Sebastian (Mark Strong), from whom he was separated as a child. After 28 years of searching, Nobby has finally tracked his brother down in London – unaware that he’s an MI6 assassin. 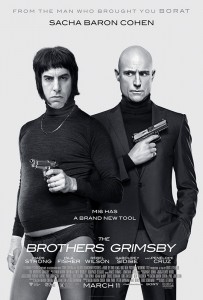 The unit’s special effects supervisor, Cordell McQueen, was responsible for pulling off many of the film’s explosions. Shooting on the Lourensford wine estate in Cape Towm, South Africa, meant that explosions had to be arranged with as little real-world destruction as possible. For McQueen, these sizzling explosions meant one thing: propane

In his new film, The Brothers Grimsby, Baron Cohen once again invents another wholly original creation – the story of an idiot (Baron Cohen) and his brother, the spy (Mark Strong), with whom he reconnects after 28 years.

“When Sacha makes a movie, there’s not a quota of outrageousness, but there is a quota of comedy,” says Todd Schulman, Baron Cohen’s producing partner.

For The Brothers Grimsby, that meant creating a world of spies as real, as believable, and as serious as any action franchise. In short, it couldn’t be a spy spoof. “We wanted to create a real action movie, with the stakes, the great stunts, and the jeopardy of a real action movie – and then throw an idiotic character in the middle of that, and see how that character changes the course of the movie,” says Baron Cohen.

With that in mind, the filmmakers approached Louis Leterrier – one of the most in-demand action-film directors (Now You See Me, The Transporter), to take the helm. Leterrier says that when he was approached to direct Grimsby, he was gratified by the chance to work with a star he had long admired.

Leterrier says that shooting comedy was unlike any other kind of filmmaking he’s ever done before. “I had longer takes, 45 minute takes. I was putting several cameras on a scene, doing crossing overs. It was a new kind of filmmaking for me,”

Playing Sebastian is Mark Strong, fresh off of his success as Merlin in Kingsman: The Secret Service. “We cast someone who we thought could actually be cast in a real action franchise, and Mark Strong is that guy,” says Baron Cohen. “I knew Sacha’s past films, but I didn’t know what it would entail, to be honest,” says Strong, about joining a Sacha Baron Cohen comedy.

Isla Fisher plays Jodie. Fisher previously teamed with director Louis Leterrier on the hit film Now You See Me. “It’s great to see him branching out and doing comedy, because Louis has a fresh and exciting way of shooting things,” she says. Of course, Fisher is Baron Cohen’s real-life wife, and she says that Nobby is one of her favorite of her husband’s characters – for her own reasons. “I’m really lucky with this character, because Sacha wore a wig,” she says.

Though Fisher is Baron Cohen’s real life wife, in the film, Nobby’s girlfriend, Dawn is played by Rebel Wilson.  “The thing that everyone loves about Sacha’s comedy is that it really pushes the boundaries,” says Wilson.  “I love edgy material – I’m known for doing some very edgy standup and sketch comedy – but this film really goes to the next level.”

Coming onto The Brothers Grimsby just two weeks after completing her work on Pitch Perfect 2, Wilson says that she went straight into “research.”  “Sacha wanted Dawn to be an authentic Northern girl, so I went on a massive six-day research trip to the north of England,” she says.  “I went to hair and nail salons – I even worked in a fish and chips shop in Blackpool for an afternoon.  It was intense.”

The film’s director of photography was Oliver Wood, who bridges the worlds of action films (including The Bourne Supremacy) and comedy (with many Adam McKay/Will Ferrell collaborations (Anchorman 2..)). “I wanted him to film the crazy car crashes of the Bourne movies, but crashed by Sacha Baron Cohen,” says Leterrier.

In approaching his direction of The Brothers Grimsby, Louis Leterrier’s main focus was to keep pushing the extremes – pushing the comedy, pushing the locations, pushing the design, pushing the cinematography – to give the audience the most bang that they can expect. “In France, they call me ‘Mr. Plus’ because I push, push, push, until we get the best, the most extreme, the most dynamic version of a scene,” says Leterrier. “Our poor camera operators – the whole movie is handheld or Steadicam, cranes and cable cameras. That’s hard core camera movement. Combine that with Sacha’s comedy, where he can move anywhere he wants at any moment, and you’re completely out of your comfort zone. There’s no safety net. But I think that’s why Sacha and I found each other appealing to work with – my approach to directing is the same as his approach to comedy.”

The Brothers Grimsby was shot in two major locations – England and South Africa.