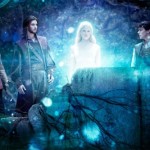 Ernie Malik, unit publicist for The Chronicles of Narnia: The Voyage of the Dawn Treader, confirmed that filming began on July 27, 2009 on location in Queensland, Australia. Filming took place at Warner Roadshow Studios in August and September 2009, with filming of exterior shots on board the ship at Cleveland Point in September 2009 and the Gold Coast Seaway.

The two younger Pevensies, Edmund (Skandar Keynes) and Lucy (Georgie Henley), are staying with their cousin Eustace Scrubb (Will Poulter). They find themselves drawn into a painting of an old ship, where they join the new King of Narnia, King Caspian (Ben Barnes).

The film will premiere on November 30, 2010 in digital 3D at the Royal Film Performance and will have its wide theatrical release in traditional 2D, RealD 3D and Digital 3D from the second of December onwards.

It will be given a pre-release gala on December 8 in Knoxville, Tennessee followed by a North American premiere on December 9, 2010.

Nihilistic Software and Disney Interactive Studios was supposed developed a video game based on the film for Xbox 360, PlayStation 3 and Wii when Disney was still involved in the project. But when to Fox took over the production, Nihilistic sought out negotiations with Fox Digital Entertainment division failed to agree for a settlement resulting to the cancellation of the video game.

Fox Digital Entertainment later collaborated with Gameloft to produce a mobile game for iPhone and iPod Touch which was released on November 18, 2010.