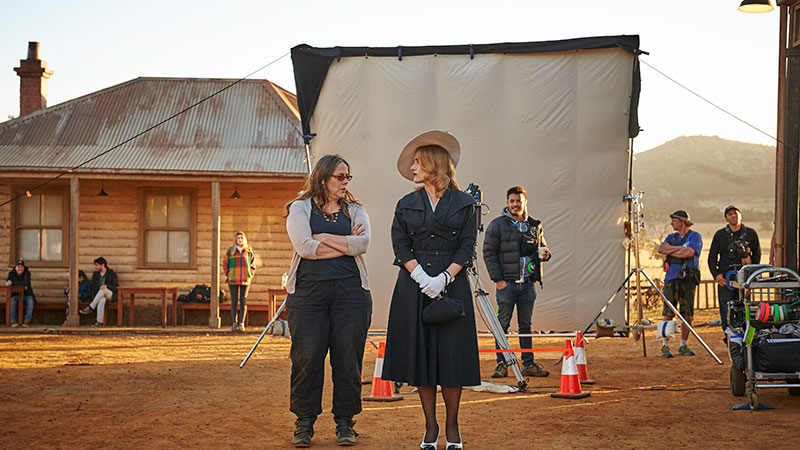 A glamorous, worldly dressmaker returns to her small Australian hometown to seek the truth behind her notorious reputation. This dark and quirky comedy stars Academy Award winner Kate Winslet as Tilly Dunnage, who cares for her eccentric mother, schemes with the local sergeant who has secrets of his own, and falls for local farmer Teddy. As she starts to unravel her scandalous past, she transforms the town’s women with her exquisite creations. 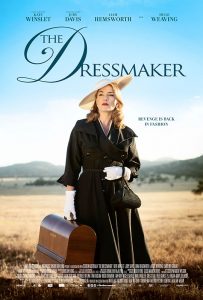 When The Dressmaker was published in the year 2000, producer Sue Maslin saw the novel and recognized the name of the author, Rosalie Ham. “I went to school with a Rosalie Ham – it turned out it was one in the same,” Sue Maslin explains. “We both grew up in a little country town called Jerilderie, in the southern Riverina area of NSW (Australia), and we both were at boarding school in Melbourne which meant from a very early age catching a bus that took five and a half hours to travel up to Jerilderie and drop us off in the middle of the night to be picked up by our parents.”

Rosalie Ham says: “I went to a writing course and they said ‘you’re going to write a novel, a practice novel, you probably won’t get this novel published because people don’t often get their first novel published’. And I thought, fine, well I’ll just put everything in. ‘Everything’ ended up being all the big themes – death, marriage, betrayal.” And so Tilly Dunnage, her mother Molly and the fictional town of Dungatar were born.

The character of Tilly seems drawn, at least in part, from Rosalie’s mother. “My mother was one of the dressmakers in Jerilderie. She happened to be divorced, and so there was a certain amount of scandal that was attached to that.”

Sue Maslin continues: “I fell in love with this idea of going back to your village after many years away and being the proverbial stone that’s dropped into the pond that creates the ripples going out – It captured something that I recognized.”

“When someone comes to you and says I want to turn your book into a film, it’s very exciting but then there’s also some sort of fear that they’re going to change it.” Explains Rosalie. “But, Sue understood exactly what it was about. I had seen Road to Nhill (which Sue Maslin had produced in 1997), and loved that film because it understood the relationships between characters in a small community, and human nature. So once the option had expired and Sue told me what she wanted to do, it was a fait accompli.”

How did Jocelyn Moorhouse come into the story? Sue explains: “I needed somebody that could capture that edge between comedy and tragedy that’s so essential to the story, and the person that I kept going back to was Jocelyn Moorhouse, mostly on the basis of her beautiful, funny, sad film Proof which was the film that really announced her as the extraordinary director that she is. I flew to Los Angeles to meet Jocelyn and we had a really great conversation about it but she was not ready to make the film at that time.”
However, as with many elements of this story, persistence was key.

Jocelyn Moorhouse recalls: “I suggested other people she could go to, but Sue wouldn’t take no for answer. She kept coming back to me every couple of months – ‘Are you still too busy?’ – so I finally read the book, immediately fell in love with it and was completely obsessed with turning it into a movie.” Jocelyn came on board, not only as director but as writer of the screenplay.

Rosalie Ham says: “I knew that once I signed the option, I had to let it go. It was no longer my project. When Sue mentioned that she would like to get Jocelyn to write the screenplay, I knew that Jocelyn would do a wonderful job because of Proof. It’s a film I’ve never forgotten.”

It was clear to Sue Maslin from early on that this was not going to be a low budget film. The setting and costumes were going to be period – not only that, but couture period design. To access such a budget, casting was key. From the outset, Sue and Jocelyn needed to start thinking about actresses with sufficient caliber and box office clout, as well as the talent and extraordinary range to embody Tilly.

When Sue Maslin sent the script to Kate Winslet, Jocelyn remembers saying to Sue: “What’s the harm, she can only say no, or she might say yes.” Jocelyn Moorhouse remembers: “We kept wondering if we should just give up, but I couldn’t get the idea of Kate Winslet playing Tilly out of my head, so I said let’s just keep waiting, and finally one day I received the most beautiful, effusive email from Kate saying ‘I love this character, I know how to play her, I know her, yes I’m doing it.’”

Like Sue Maslin, Rosalie Ham and Jocelyn Moorhouse, Oscar-nominated Director of Photography Don McAlpine also grew up in rural Australia. For Don, coming to know the script and form the visual execution of the film was a process of absorption that began years before the first day of shooting.

“I knew Jocelyn was writing the script two or three years ago before production started,” says Don McAlpine. “On most films I arrive three weeks before shooting starts, but this wasn’t the case. I enjoy the way she and [co-writer of the film] P.J. Hogan (Jocelyn’s husband and a film director) make films. I’ve reached a stage in my career where I pick jobs where I’m going to get something back out and I think this is one of them.”

Don’s first task, which would result in the film needing an even larger budget, would be to find Dungatar…

Sue continues: “Jocelyn and I looked all over Victoria, all over New South Wales, into South Australia, over a period of almost three years we kept searching. We brought Don McAlpine on the road trips and we brought Roger Ford, the production designer.”

Don continues: “Eventually it was resolved that we’d build the town, and of course the next thing is to find a location near a place that could be close to services.”

With Kate Winslet secured, and the town of Dungatar emerging from the earth, Casting Director Christine King worked with Jocelyn Moorhouse and Sue Maslin to assemble a cast of incredible Australian actors who would bring the townsfolk of Dungatar to wonderful, wicked life.

Sue Maslin explains: “We knew from Draft One that whomever else we cast, Molly was going to be played by Judy Davis, but we couldn’t ask her until the script was ready, and until we could tell her who was going to play Tilly. We finally had the great joy of saying that Tilly would be played by Kate Winslet and Judy said ‘Of course I’ll play Molly’.”

When Jocelyn Moorhouse talked with Marion and Margot about the color scheme of the clothes, they agreed that at the beginning of the film, like a lot of Australian country towns of the era, Dungatar is behind the times. People would be wearing clothing from the 1930s and ‘40s. Tilly would then bring a very contemporary, European sensibility. These new creations had to be very strong – dark reds, mustard yellow, emerald greens. They wanted strong colors to stand out against the dusty palette of the town.