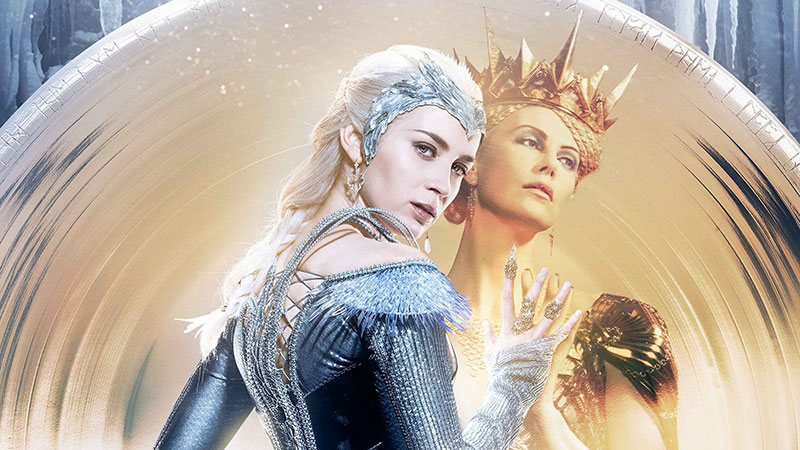 Charlize Discover the story that came before Snow White in The Huntsman: Winter’s War.  Charlize Theron stars as evil Queen Ravenna, who betrays her good sister Freya (Blunt) with an unforgivable act, freezing Freya’s heart to love and unleashing in her an icy power she never knew she possessed.  Retreating to a kingdom far to the north, Freya raises an army of Huntsmen as her protectors, with the only rule that no two of them should ever fall in love. As a war for domination escalates between the two queens, the hero standing between good and evil is Freya’s most elite Huntsman, Eric (Hemsworth). 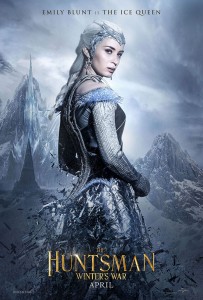 While director Cedric Nicolas-Troyan prefers not to pre-visualize or storyboard character scenes, preparation such as this is essential for action sequences, such as the Goblin King battle. This fight among the Goblins and Eric, Sara and the dwarves was fully pre-visualized as a simple-animatic and played back on set to allow the cast and crew a constructed reference on which to base the action.

In 2012, Snow White and the Huntsman breathed new life into the fairy-tale genre with a dark, epic take on the classic story. The film earned nearly $400 million at the worldwide box office. When it came time to consider a return to the dark fantasy world the creators had imagined, the producers decided to explore a story touched upon in the original, which alluded to Eric’s past love and her tragic death.

Taking that sideways look at the franchise also offered the filmmakers a chance to reflect on the success of the first movie, and identify areas of improvement.  “We didn’t want this one to be as dark as the first picture,” advises producer Joe Roth, who has reimagined fairy tales such as Maleficent and Oz the Great and Powerful. “We also really wanted to deliver on the romance.”

The script, by Evan Spiliotopoulos and Craig Mazin, based upon Evan Daugherty’s characters, does just that, telling of Eric’s doomed first—and only—true love, how they were brought together and how they were torn apart.  Nested in this universe, it also serves as an origin story for the Huntsman, who arrived in the first adventure not as a mystery, but fully formed.

The filmmakers didn’t need to look far to find a director with optimism, vision and creativity to tell Eric’s story.  Cedric Nicolas-Troyan, a well-respected visual effects supervisor who was instrumental in the stunning visuals of the first film, had long harbored a desire to direct his own feature one day.

Bringing together an A-list group of performers on the first film was a challenge, but the cast assembled for The Huntsman: Winter’s War is even more stellar.  Chris Hemsworth, Charlize Theron and Nick Frost return to the universe they helped build, and they are joined for this outing by Jessica Chastain, Emily Blunt, Rob Brydon, Sheridan Smith and Alexandra Roach, to name a few.

Among the most popular characters re-introduced from Snow White and the Huntsman were the seven dwarves, played by accomplished actors including Ray Winstone, Ian McShane and the late Bob Hoskins.  They proved to be extremely popular, and it was a conscious decision to bring them deeper into this story…and learn more about what makes a dwarf tick.

The dwarves’ appearance in the next chapter was all but guaranteed, and producers brought back Nick Frost, who had played the beloved Nion in the original movie.  “It’s different from a dwarf point of view,” explains Frost, “because we’re in it straight away this time.”

The Huntsman: Winter’s War was shot at both the U.K.’s Shepperton and Pinewood Studios over the course of 16 weeks, as well as at landmark historical venues Wells Cathedral and Bishop’s Palace, in Somerset.  Additionally, some of U.K.’s most beautiful green spaces including Windsor Great Park (Bears Rails, South Forest, Manor Hill, Johnson’s Pond), Frensham Common, and the magical woodlands of Stockwood and Puzzlewood were used for settings.

These proved to be unique and enchanting places, where the unit explored paths spread over bewildering woodland in and amongst rock formations.  This was the perfect place to set the Goblin Forest, where Eric’s journey to retrieve the Magic Mirror comes to its exciting apex.

Colleen Atwood, a three-time Oscar® winner, employed a team whose numbers reached some 120 people—not including additional contractors—to prepare the number of costumes the production demanded.  These included cutters, fitters, craftspeople, and a whole room of people who specialized on the Huntsmen’s leather armor. Advances in technology since the first film helped Atwood when it came to the dwarves’ costumes, which had to be constructed in two sizes—for the principal actors and their body doubles.