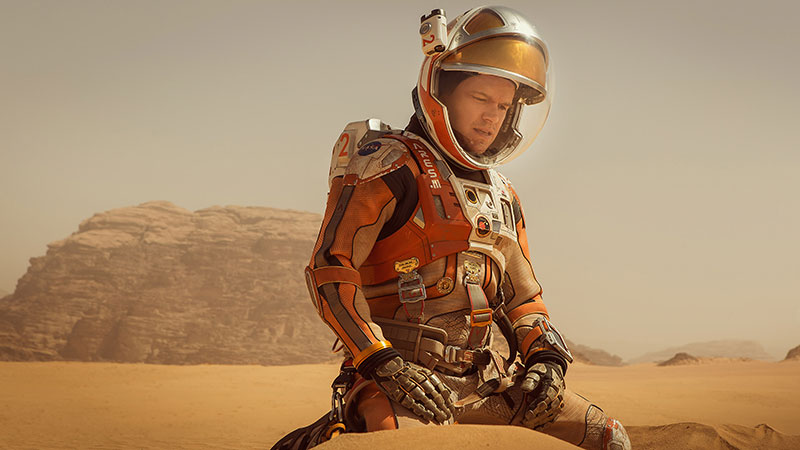 During a manned mission to Mars, Astronaut Mark Watney (Matt Damon) is presumed dead after a fierce storm and left behind by his crew. But Watney has survived and finds himself stranded and alone on the hostile planet. With only meager supplies, he must draw upon his ingenuity, wit and spirit to subsist and find a way to signal to Earth that he is alive. 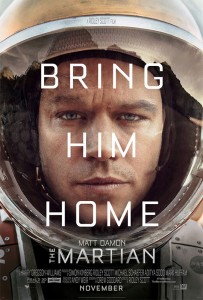 Production was allowed to film rocket launches at Cape Canaveral, including the December 2014 liftoff of the Orion, a next-generation spacecraft designed to take humans deep into space as a first step toward human exploration of Mars.

The screenplay is based on an original novel by computer programmer-turned-writer Andy Weir . Aditya Sood was the first producer to read Weir’s eBook, prior to its 2014 hardcover publication by Random House, when it existed only online in series form and then as a eBook on Amazon.

Producer Simon Kinberg was hooked after thirty pages, and Fox optioned the book on behalf of Kinberg’s Genre Films, which has a first-look deal at the studio. The book was then sent to red-hot screenwriter Drew Goddard, with an eye toward having him write and direct. Kinberg says Goddard turned in an exceptional draft within several months, despite, the producer says, the challenges of adapting a book with rigorous scientific and mathematical problem solving, numerous characters and layered storylines.

Matt Damon received the screenplay from  Kinberg, with whom he worked on Elysium. He sent it to Damon on a Friday and received an enthusiastic response by Sunday.

With Goddard’s script and Damon’s interest, the project went into fast-track development, coming to a pause when Goddard accepted a directing assignment. This left the director’s chair ready to be filled by, according to Kinberg, “not just a great director, but a master director.” Several A-list helmersfamiliar with the project were circling when the producers received some unexpected news: Ridley Scott was available.

In Goddard’s script, the astronauts and NASA personnel are equal parts of an ensemble. Scott fleshed out some of the action sequences and made Commander Melissa Lewis’ arc even more active, creating another of the strong female roles that have marked many of his previous films. Jessica Chastain, who portrays Lewis says, “She’s such a well-written character, another in the legacy of Ridley’s remarkable women characters. ”

Principal photography on The Martian began November 8, 2014 in Budapest. The gorgeous Central European capital has become known for hosting a litany of big budget Hollywood movies because of its beautiful locales and experienced local crews. But what particularly drew filmmakers to the city for this project are the sound stages at nearby Korda Studios.

Korda’s Stage 6, said to be the largest in the world, was ideal for constructing a Martian landscape that would include the habitat (Hab) and the launch pad for the MAV. The set was used primarily for dialogue scenes, Hab interiors, and the giant sandstorm sequence. Matching wide-scope vistas were later filmed in Jordan.

Rather than having green screen appear on the control room monitors and then adding imagery in post, Ridley Scott prefers to see the graphics “in shot,” using them as light sources and allowing the actors to react to the images in real time.