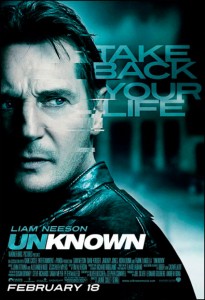 Dr. Martin Harris (Liam Neeson) awakens after a car accident in Berlin to discover that his wife (January Jones) suddenly doesn’t recognize him and another man (Aidan Quinn) has assumed his identity. Ignored by disbelieving authorities and hunted by mysterious assassins, he finds himself alone, tired, and on the run. Aided by an unlikely ally (Diane Kruger), Martin plunges headlong into a deadly mystery that will force him to question his sanity, his identity, and just how far he is willing to go to uncover the truth.

Liam John Neeson is an Irish actor who has been nominated for an Oscar, Golden Globe and a BAFTA. He has starred in a number of notable roles including Oskar Schindler in Schindler’s List, Agent Bryan Mills in Taken, Michael Collins in Michael Collins, Jean Valjean in Les Misérables, Qui-Gon Jinn in Star Wars Episode I: The Phantom Menace, Alfred Kinsey in Kinsey, Ras Al Ghul in Batman Begins and the voice of Aslan in The Chronicles of Narnia film series. He has also starred in several other notable films, including Excalibur, The Dead Pool, Darkman, Rob Roy, Nell, Gangs of New York, Love Actually, Kingdom of Heaven, The Haunting, Clash of the Titans, and The A-Team.

The film was directed by Jaume Collet-Serra, The screenplay was written by Oliver Butcher and Steve Cornwell, based on the novel Out of My Head by Didier van Cauwelaert. Joel Silver, Leonard Goldberg and Andrew Rona produced the film. The director of photography is Flavio Labiano. Principal photography took place in early 2010 in Berlin, Germany.