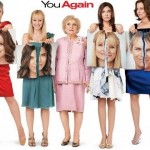 Marni (Kristen Bell), discovers her brother, Will (James Wolk), is about to marry her high school rival, Joanna (Odette Yustman), and sets out to expose the fiancee’s true colors. The plot thickens when Marni’s mother Gail (Jamie Lee Curtis) meets up with Joanna’s aunt Ramona (Sigourney Weaver), and it is revealed that Gail and Ramona were also high school rivals. It also heats up when Grandma Bunny (Betty White) notices Joanna’s grandmother Helen (Cloris Leachman) as her own high school rival.

New York Times critic Stephen Holden wrote that “There is not a laugh to be found in this rancid, misogynistic revenge comedy,” declaring “Like so many Disney movies, ‘You Again’ exalts shallow, materialistic values, then tries to camouflage its essentially poisonous content with several layers of sugar coating and weepy reconciliation.” Richard Roeper gave the film an F and stated that it was one of the worst movies he’s ever seen.

You Again was completed on April 3, 2010. The rivalry between the two grandmothers, Betty White and Cloris Leachman, is a reference to the conflict between the two on The Mary Tyler Moore Show.