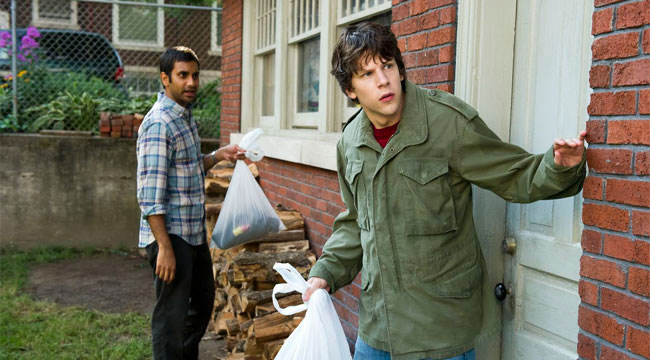 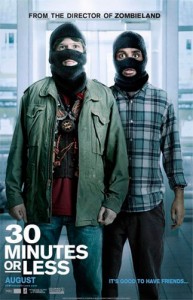 A red band trailer for the film was released on April 21, 2011.The day after the studio released a couple teaser posters

It is produced by Columbia Pictures and funded by Medienboard Berlin-Brandenburg, and based loosely upon the Collar bomb case, an unusual 2003 bank robbery which occurred in Erie, Pennsylvania.

In the action-comedy 30 Minutes or Less, Nick (Jesse Eisenberg) is a small town pizza delivery guy whose mundane life collides with the big plans of two wanna-be criminal masterminds (Danny McBride and Nick Swardson). The volatile duo kidnaps Nick and forces him to rob a bank. With mere hours to pull off the impossible task, Nick enlists the help of his ex-best friend, Chet (Aziz Ansari). As the clock ticks, the two must deal with the police, hired assassins, flamethrowers, and their own tumultuous relationship.

Filming took place in Grand Rapids, MI from July to September 2010; and a bank robbery scene was filmed at a vacant bank on James St. in Ludington, Michigan. Taylor Lautner will have a cameo appearance in the film.

30 Minutes or Less screenplay was written by Matthew Sullivan and Michael Diliberti, and the film will be produced by Ben Stiller, through his production company, Red Hour Films. The film will be released on August 12, 2011. Danny McBride will star as one of the criminals who takes the man hostage, whilst Fred Ward will play his father.