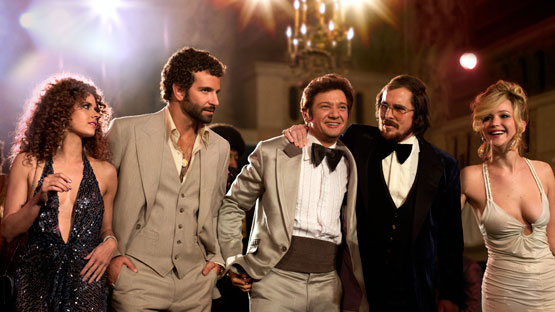 A fictional film set in the alluring world of one of the most extraordinary scandals of the 1970s, American Hustle tells the story of brilliant con man Irving Rosenfeld (Christian Bale), who along with his equally cunning and seductive partner Sydney Prosser (Amy Adams) is forced to work for a wild FBI agent Richie DiMaso (Bradley Cooper). 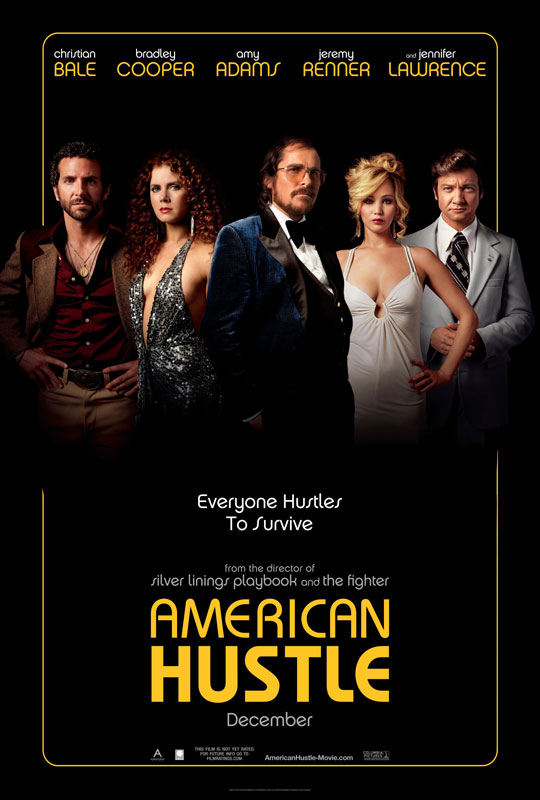 American Hustle marks the third part in a three-film evolution for director David O. Russell.  Beginning with The Fighter, continuing with Silver Linings Playbook, and playing out on a larger canvas than ever before in American Hustle, Russell centers on characters who are trying to change their lives through a process of reinvention.

American Hustle began with screenwriter Eric Warren Singer, who approached Roven and Suckle about making a film about the Abscam story for Atlas Entertainment and wrote a script that earned a spot on the Black List.

“All con artists are gifted story tellers in their own right — which is why I am drawn to them,” says Singer.  “We share a similar craft: telling the tale, drawing in an audience as you would a mark.  Good storytelling is as much of a seduction as any con.”

Christian Bale reunites with David O. Russell to take on the role of Irving Rosenfeld, a hustler and a romantic. “I never met a more charming character than Christian playing Irving,” says Amy Adams, who plays Sydney Prosser.

Jennifer Lawrence reunites with Russell to play Irving’s estranged wife Rosalyn, an unstable Long Island housewife who is the opposite of Adams’ elegant Sydney.  For the target of the sting, Russell cast Jeremy Renner as Carmine Polito, a New Jersey politician who sees an opportunity to remake the run down, working class region – if he can find the right investor.

Russell relied on his longtime collaborator, production designer Judy Becker, to bring about the look he desired for the film.  Becker was excited by the opportunity. Her research, combined with the screenplay, inspired her to build unique worlds for the characters that expresses who they are. But it wasn’t just the chance to re-team with one of her most cherished collaborators that excited her – she was also drawn to the film by the fact that it is set in New York in the 1970s.

With the film set in the 1970s, costume designer Michael Wilkinson had a chance to express the decade’s distinctive design through the film’s fashion.  His designs further expressed the film’s theme: characters remaking themselves, transforming themselves into the people they aspire to be.

Music is a very important part of any David O. Russell film, and American Hustle is no exception.  With the film set in the 1970s, Russell and his music supervisor, Susan Jacobs, weave in a variety of classic tracks, deep cuts, and new twists on old favorites.  Jacobs tells that Russell often writes with specific cues in mind – and sometimes, those cues will make their way straight through to the final film.