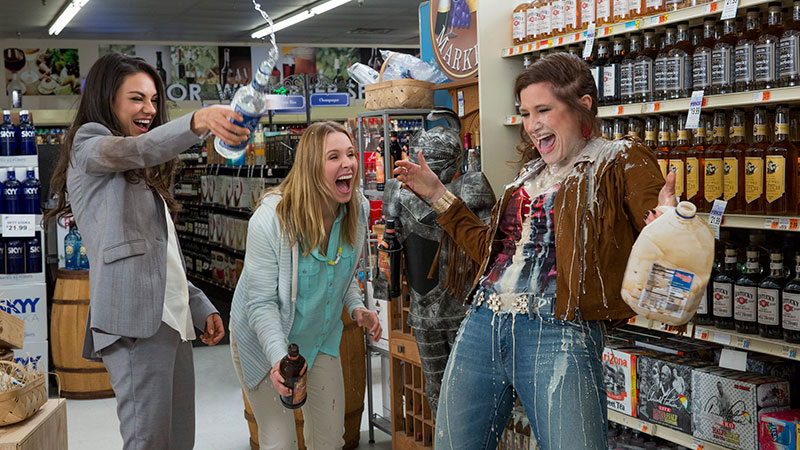 From the writers of The Hangover, Amy Mitchell (MILA KUNIS) has a seemingly perfect life: a great marriage, over achieving kids, a beautiful home and a career. However, she’s over-worked, over-committed and exhausted to the point that she’s about to snap. Fed up, she joins forces with two other over-stressed moms, Kiki (KRISTEN BELL) and Carla (KATHRYN HAHN, Transparent), on a quest to liberate themselves from conventional responsibilities – going on a wild, un-mom-like binge of long overdue freedom, fun and self-indulgence –and putting them on a collision course with PTA Queen Bee Gwendolyn (CHRISTINA APPLEGATE) and her clique of devoted, perfect moms, Vicky (ANNIE MUMOLO) and Stacy (JADA PINKETT SMITH). 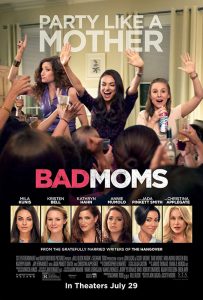 The film’s grocery store rampage was staged at the suburban Gretna location of the local Breaux Mart chain. This sequence was memorable for wild physical comedy and Carla’s amourous antics.

How in the world did the writers of the ultimate dude movie, The Hangover, end up making a girl-power tribute to the awesomeness of moms? R rated, of course. “Reading the script, you’d think a woman wrote it, but talking to Jon and Scott, you realize it’s an homage to their wives,” said actress Mila Kunis, a real-life mom herself. In fact, all six of the film’s leading ladies are mothers, as is Producer Suzanne Todd. Kunis signed on as lead character Amy Mitchell, a working mom whose myriad obligations leave her cut off from friendships, let alone the idea of fun for its own sake. Poor Amy is too busy to realize what she is missing.

Bad Moms filmmakers Jon Lucas and Scott Moore have been writing partners and friends for more than 15 years. During that time, they also became dads, as well as directors. “We write from home, sitting in front of our computers, so we see our wives bust their asses all day,” said Moore. “They’re running around, picking up kids, making lunches, dealing with all these pressures. There’s a lot of drama ~ and fertile ground for comedy.”

Jada Pinkett Smith, who plays Stacy, a hard-edged sidekick in Gwendolyn’s unforgiving entourage, described the mom-dad divide: “They’re not in the soup like the wives are. They can sit on the edge of the soup bowl and look down at the scene from a different point of view. We moms can only see what’s right in front of us while our husbands get to watch and say, this is some funny sh*t.”

Lucas and Moore found expert guides to help them stir the soup. As part of their research, they hosted dinner parties with lots of moms, lots of wine and lots of stories from the trenches. “What moms talk about is not how it’s usually portrayed in the average Hallmark-y Mom movie,” said Lucas. “It’s way more interesting and fun, and way more R-rated. Sometimes X-rated. And, yes, there’s conflict!”

Emmy Award®-winning comedienne Christina Applegate appreciated the rare opportunity Bad Moms offered women actors. “I was attracted to this script because it’s real – a bigger, bolder, more R-rated version of real. And for the Carla character alone, this has got to be some of the best dialogue I’ve ever seen a woman get to do in a film.”

Amy and Mike’s visit to marriage counselor Dr. Karl, played by Wanda Sykes, kept the actors laughing. “Wanda is one of those people where almost anything she says makes you laugh,” said Walton. “Mila and I were losing it. I was crying laughing and felt like a real amateur.”

The writer-directors did not set out to cast only moms as their leading ladies, but that’s how it turned out. “As we talked to actresses about the script, we noticed that the ones who were moms connected to the material in a totally different way,” said Moore. “They brought something to the table. If somebody said, ‘This weird thing happened with my kid, can we put it in?,’ we’d say, ‘The weirder the better.’ “We also heard: ‘You need to crank this up! These moms aren’t half as crazy as we get!”

Bad Moms is the second feature film Jon Lucas and Scott Moore have directed together, and Kunis’s first feature film role since her daughter’s birth.

Bad Moms began filming Monday, January 11 in uptown New Orleans with carefree scenes of Amy’s first day of freedom from good mom duties. For the next two months, the Bad Moms cast and crew depicted her transition from unappreciated to unleashed at locations throughout the Crescent City.  The story takes place during springtime in a Chicago suburb with blues skies, wide green lawns and blossoming trees. “We wanted a relateable setting that felt very American,” said Lucas. But they needed good weather, or at least the chance of it, and were filming in winter, so New Orleans stood in for Chicago.

Executive Producer Mark Kamine described the transformation. “We had to avoid palm trees and
certain signature New Orleans architecture, but it was actually pretty easy to find the Midwestern look that Jon and Scott wanted. Except for a couple thunderstorms, the weather treated us well.”

Lucas and Moore also wanted the film’s look to reflect their cast. Director of Photography Jim Denault, whose credits include Pitch Perfect 2 and Boys Don’t Cry, was their choice for the mission. “Jim has photographed a lot of women. That felt very good to our filmmakers and our stars,” said Kamine. Denault’s skills were also appreciated by production designer Marcia Hinds. This was important because Bad Moms was not shot on big soundstages, where walls could be removed or roofs raised to accommodate camera set-ups. Every scene was shot in a real location.