Black Death is a 2010 horror film directed by Christopher Smith and from an original screenplay by Dario Poloni. It stars Sean Bean, Eddie Redmayne and Carice van Houten, along with newcomer Kimberley Nixon. 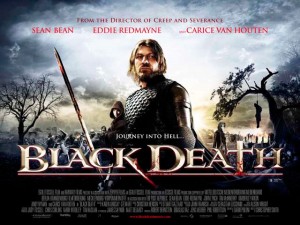 International sales were handled by HanWay Films. Amongst other deals, Revolver Entertainment/Sony acquired the rights for the UK and plan a release on 28 May 2010, while Wild Bunch will distribute Black Death in Germany. The film is part of the Canadian Fantasia 2010.

The film was originally due to be directed by Geoffrey Sax, with Rupert Friend and Lena Headey attached to star. Famke Janssen was later considered for Headey’s role.

The film was shot in the German federal state of Saxony-Anhalt at Palace Blankenburg in the city of Blankenburg and Castle Querfurt in Querfurt and Zehdenick, Brandenburg in the first half of 2009. Van Houten’s first day on set was 14 May 2009. Technical elements included production design by John Frankish, a spartan score by composer Christian Henson, and desaturated lensing by director of photography Sebastian Edschmid.

He explained his approach to the film:
It’s a ‘medieval guys on a mission’ movie. The period of the black death – what’s fantastical and rich about that period? I said, ‘What if we took a realistic approach?’ The people of the time believe the plague was sent by God to punish them for their sins, or by the Devil to torment them. I wanted to find out what the characters felt and posit them on a journey of ‘is it real? Or is it not real?’ What would a necromancer be like if he existed? We added this fundamentalist knight, so it touches on fundamentalism. It’s a super dark film but it’s exciting. It’s like a dark parable about how things haven’t really moved on in the last 600 years.