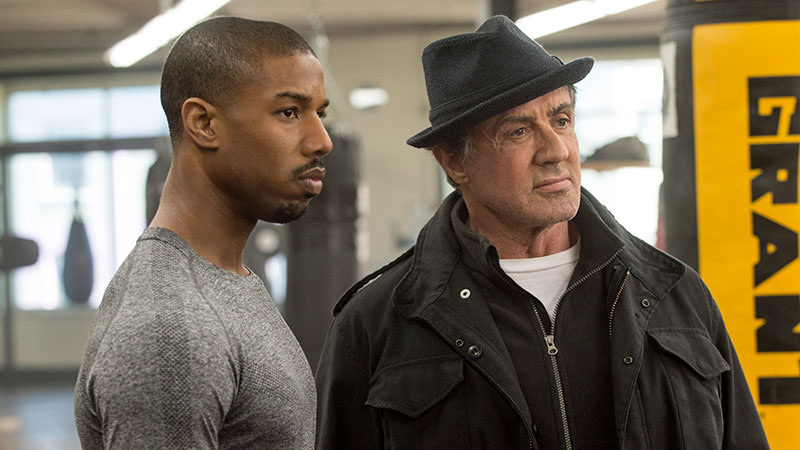 Adonis Johnson (Michael B. Jordan) never knew his famous father, world heavyweight champion Apollo Creed, who died before he was born. Still, there’s no denying that boxing is in his blood, so Adonis heads to Philadelphia, the site of Apollo Creed’s legendary match with a tough upstart named Rocky Balboa. 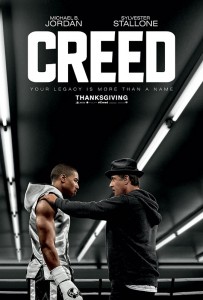 The fact that, for the first time, a story about Rocky Balboa was not penned by Stallone could have been cause for concern among the two production entities who compose the banner Chartoff Winkler, the principals being Robert Chartoff and Irwin Winkler. The pair produced the original “Rocky,” which was nominated for ten Oscars and won three, including Best Picture. Chartoff passed away earlier this year, and “Creed” is dedicated to his memory.

The challenge of re-envisioning the ultimate underdog story that began with “Rocky” was one that writer/director Ryan Coogler considered even before he was out of film school. “I grew up watching ‘Rocky’ movies with my dad; it was our thing,” he states.

Before Adonis could coax Rocky into coming back, Coogler had to receive Sylvester Stallone’s blessing to work with the character, and the actor’s commitment to put the gloves back on. Stallone, also a producer on the film, has played one of the most legendary and beloved characters in film history in six “Rocky” films over nearly four decades. Coogler smiles when recalling his first meeting with the icon. “I could tell he was a little apprehensive. I hadn’t even made a feature film yet, so he was probably thinking, ‘Who is this kid coming in talking about making a “Rocky” movie?’ But I could tell he was also thinking about every different way it could work.” The filmmaker also mentioned the idea to his “Fruitvale Station” star, Michael B. Jordan, during production on that film.

“Getting into shape for this movie was a year-long process for me,” Jordan reveals. “I was slowly training here and there, between projects, until I could go full steam ahead.” The actor worked with technical advisor/boxing trainer Robert Sale out of the Powerhouse Gym in Burbank, California, learning the fundamentals much as his character practices them in the film.

Leaning into its legacy, Coogler wanted “Creed” to evoke the gritty, old-school style of the earliest “Rocky” films while also forging its own modern-day identity. It was important to him to do justice to the characters, to create a film that could cross the divide between Baby Boomers and Millennials, Coogler had come up with the story, and partnered with fellow writer Aaron Covington on the screenplay.

The role of the singer/songwriter, which required the actress playing her to also perform, proved a difficult one to cast, but ultimately went to Tessa Thompson. Coogler expounds, “We needed somebody to hold her own with Sly and Mike, and who was really a musician, who could perform and record the music Bianca makes. And as soon as Tessa was cast, she immediately got to work with our composer, Ludwig Goransson, and started making songs that we needed to use in the movie. And she was just perfect, absolutely incredible.”

The filmmakers ensured things were as safe as possible for the actors as well as the boxers, who all have active professional careers and would return to fighting professionally right after the movie was finished. The UK’s Anthony Bellew stars as “Pretty” Ricky Conlan, Lineal Light Heavyweight title holder and undefeated best pound-for-pound boxer in the world, with a record of 36-0-0 and 28 wins by knockout. Bellew observes that he and his character have a lot in common. “Ricky is a guy from Liverpool, like me. He’s a big Everton fan, always has been, like me. He’s a guy who’s had success but has never forgotten where he’s from.”

In the tradition of the “Rocky” films, rounding out the cast are several figures from the sports media world, including commentators Max Kellerman, Jim Lampley and Michael Wilbon; journalists Anthony Kornheiser and Hannah Storm; and renowned announcer Michael Buffer, holding the mic at center ring.

Shot entirely in and around Philadelphia, “Creed” at once takes audiences back to the city where it all began, while ushering in a new era for “Rocky” fans the world over. Two must-haves for the film were the statue of Rocky and the long flight of iconic steps at the Philadelphia Museum of Art, and Coogler incorporated them in a way that he felt would make sense for the city, and the character of Rocky, today. Filming there was another matter entirely.

Adonis and Bianca’s apartment building was shot on location in North Philly, and the production found a nearby practical location for Adonis and Bianca’s first “date,” filming at the popular Max’s Steaks. The music venues where she performs were real as well: Johnny Brenda’s in Fishtown, a hipster North Philly spot; and The Electric Factory. Composer Ludwig Goransson and his frequent collaborator Moses Sumney appear in the film as Bianca’s back-up performers.